Ghanaian actress, screenwriter and producer, Lydia Forson covers the Africa issue of Nolly Silver Screen magazine. The award winning actress and reigning Africa Movie Academy Awards ambassadors speaks about her career, settling down and the role of film. “The only way to unite Africa is through film,” says Forson. 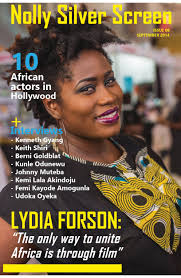 Speaking about the theme of the edition, Isabella Akinseye, Editor of Nolly Silver Screen said, “After seven editions focusing mainly on Nigeria, we decided to broaden our horizon to the encompass Mother Africa. We believe that promoting and celebrating African cinema is a burden that should be borne by all irrespective of geographical boundaries.”