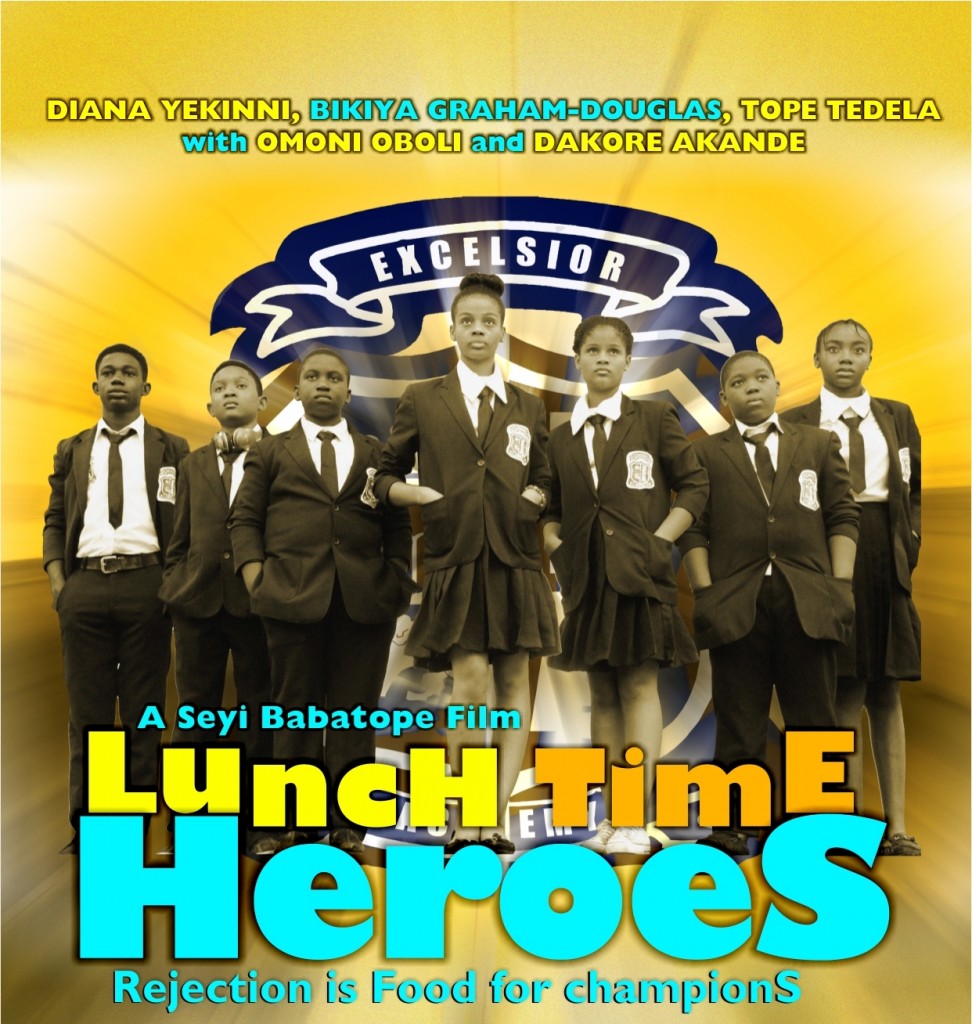 ‘When Love Happens” Director Seyi Babatope teams up once again with FilmOne Production for this movie “Lunch Time Heroes”. Exploring the family movie line in the Nigerian film industry must have been a tough call especially finding the acts to do so, but there seemed to be the little gaps for me especially since I grew up watching movies like Goonies, Kindergarten Cop, Home Alone, Daddy Day Care and most recently the remake of Annie, that I hope will be filled when another production decides to toll this line.

The movie tells the story of Banke Adewunmi, a 23-year-old National Youth Corp member on placement at a prestigious Junior Secondary School, who is tasked with teaching a group of unruly and under-achieving kids. The school is in financial crisis and the annual Governors Scholastic, Sports and Arts Cup is a must-win competition to help secure financial lifeline. Banke is on a quest to win the hearts of her students and inspire the whole school to work together which leads these unforgiving kids to becoming Lunch Time Heroes.

Banke played by Diana Yekini, scores her first major role (well as far as Xplore is concerned) the Youth Corp member who is frustrated that she isn’t giving anything to do. Banke literally takes her role seriously, that she begins to search for other options where she will be put to better use. Her composure is quite apt for her position, knowing where and when to express herself. I particularly liked the fact that the competition was on cooking, as against music, acting or dancing, but it’s not like they are in high supply!

Dakore as principal was all kinds of nasty and her disdain for the corper was visible, which felt good to watch. I was looking forward to how Banke was going to win her over and would never have thought the script would play out the way it did but this was an added touch in the plot of the production.

For the other cast members, Kenneth Okolie felt wired, too wired and calculated.  But anyone who has dealt with a PE teacher can totally relate with him.  Bikiya Graham Douglas was sweet and felt down to earth, she seemed the most likely to be a teacher while the other casts members fell in line.

Now for the moment we have all been waiting for, the kids! Like I mentioned, I grew up watching kids movies that for first timers, the kids were absolute dolls. They were truly well behaved! Not as mischievous or smart mouthed as I would have expected (I silently wanted to see that) but playful and just being kids and would go places once their folks allow them and other spots open up.

The script was straight to the point, to be able to stay within the stated time. As any movie with a competition it would have been good to see who the competition was especially since there was the talk of bribery but that didn’t happen and it felt like the kids were more in competition against themselves.

Production, editing, costumes and the sound track were on point, as for make-up and directorial angles; I wasn’t particularly a fan as makeup felt too much for school (pun intended). The teachers felt overly made up with arched eyebrows and precise eye shadows it wasn’t real. As for the angles, the closes up shots were so in our faces, it made one uncomfortable.

It was definitely nice and overall entertaining to watch “Lunch Time Heroes” however; it seemed to be lacking the potential of bringing out humor and smart wit from the kids. There is still hope for this genre of movies and kudos does go to Seyi Babatope and FilmOne for taking the plunge.