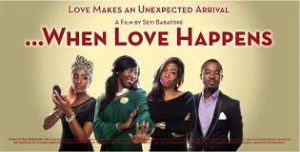 I had seen the preview of “When Love Happens” at the cinemas and had the privilege of attending the screening of the movie yesterday (guess the industry has decided to take critics and the likes seriously) and I was astonished at the level of work that went into the production.

“When Love Happens” is the story of Moduroti Bankole –Smith, a twenty eight year old events planner that has been unlucky in love. She is reminded at every turn about how wonderful love is and when she’s hired to plan her long-time friend’s upcoming wedding, she goes on a relationship expedition to find her true love.

The cast was pretty young, with some relatively unknown faces asides for some, this was welcome as most times, RomComs are for the young, but the accents (oh my word) I worry that some of them will typecast themselves at the rate, but anyway, on with the review. For the main character and first timer to the industry Mo played by Weruche, she was at home with her character, handled it well and was overly anxious for a 28 year old. She put her best foot forward and shone in certain aspects of the movie, I loved the monologue scenes, but didn’t really feel her chemistry with her male characters but I believe with time she will pick up.

For her friends Tobe and Tseju played by Gideon Okeke and Oreka Goddis, the latter, whom I felt was strong, kinda of lost me during the movie. I loved her sarcastic humor, her attitude towards life and not taking it too seriously, she was always overtly made up, with her braids always neatly packed, she must have had a headache from most scenes, but she was brilliant and definitely needs more roles in the industry. Gideon felt too obvious and oblivious at the same time, some scenes he felt like his ‘Tinsel’ character, other times, it felt like he could be smart. There wasn’t more to his character (well he was meant to be in background) which was a letdown and in the total 1,500 lines in this movie, I believe Gideon had less than 50 lines to his credit (once you see the movie, you will get this. LOL)

Long time-friend played by Beverly was spot on for me, although I don’t believe that character can be anybody’s friend but hey! She was obnoxious (much more than usual to my opinion) and a total bridezilla. I felt the accent, which was in full swing with way too much for the role, but I guess that’s the easiest way to deliver corky, cynical and sarcastic into one. She’s the type of character that gets what’s coming to them fully, but the movie wasn’t about her, so moving along. OC, is coming around as it relates to been a confident lover/player, so kudos to him, the parted lips though (at least he didn’t lick them) and the chemistry between Dare and Mo,  felt non-existent, so at some point, it became obvious how the movie would pan out.

The presence of the older industry peeps gave me a sense of relief, though short. Mo’s mum and former artist from “Love Me Jeje” fame Shaffy Bello was sweet and a breath of fresh air. While I loved Desmond, I just believe that his lone scene with Mo could have been edited making the movie 1:30:00 as against 1:40:00… (Yeah, I said it!)

Production quality was top notch. Sound and picture quality were excellent, lovely sound track and I must commend Re Olunuga. Make-up was too much as I mentioned, Oreka’s character was always made up and it was pretty heavy. For the script, it was a basic and simple script that was pulled off okay. Not sure who wrote it, as the director stated he edited the script before production started, but online I see Diche Enunwa and Temitope Bolade so, please advise. There were long scenes and dialogues that I began to get bored, but I understand that it was a full length 90 minutes plus feature, felt like 2 hours to me.

For the man of the moment the director, Seyi Babatope (Tinsel and Meet the Ojo’s), for a first feature film, “When Love Happens” was something more than an ordinary, Nigerian production.  From Xplore’s conversation with him, production took him 7months and it was done properly and no stone was left unturned. There were loads of close-up shots that made scenes look uneasy, but they must have created some desired effects, for him. The Ping-Pong shots were annoying, but I guess he had a reason for that as the effects where totally lost on me.

“When Love Happens” was an easy-going RomCom, with a well thought out cast and a great production. It premieres in the cinemas from tomorrow and earns 6/10 from Xplore.