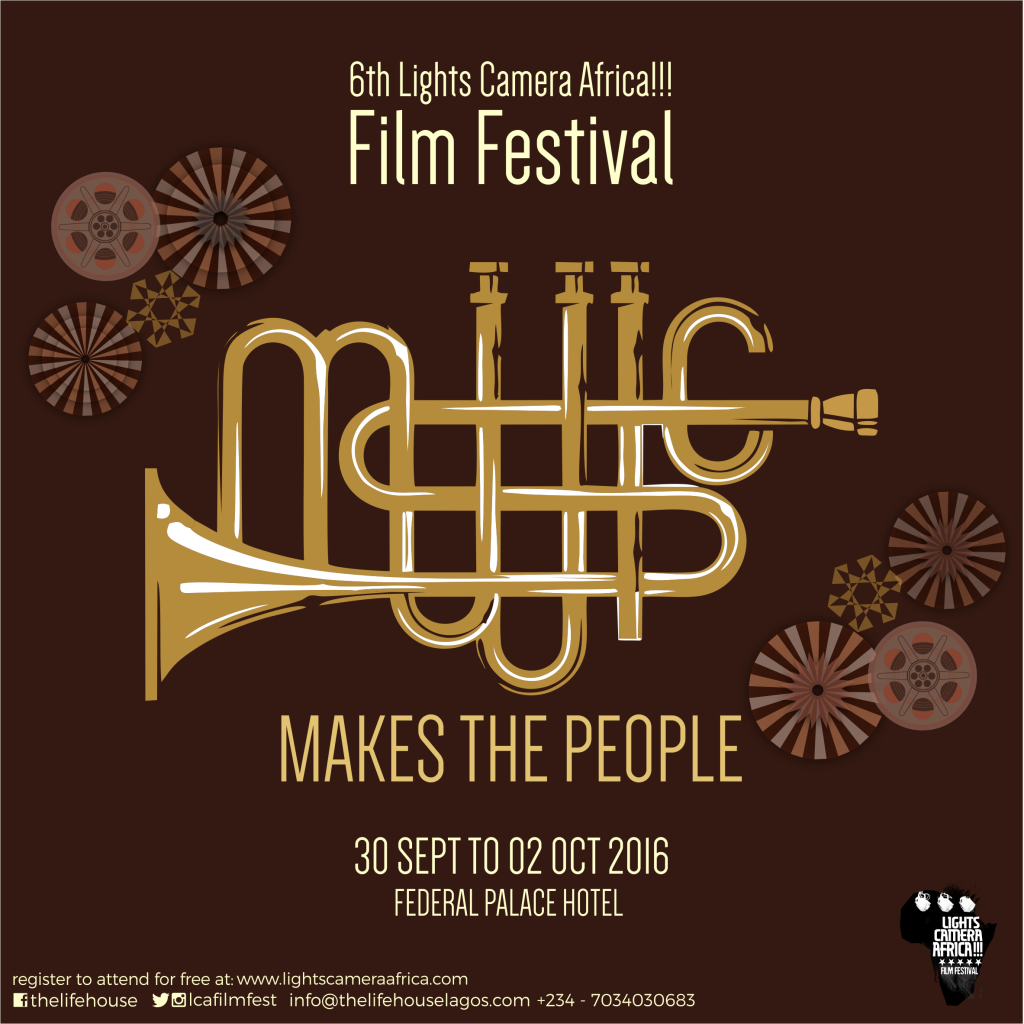 From the 30th of September to the 2nd of October, the Lagos film festival – Lights Camera Africa, will kick off at the Federal Palace Hotel in Lagos with the theme, ‘Music Makes the People’.

The line-up for the three days festival boasts of more than 20 screenings, which is a selection of eclectic films – long features, short films, documentaries and social commentaries that will thrill and engage the audience.  Abba Makama’s ‘Green White Green’ which had its world premiere at the Toronto International Film Festival opens the festival, along with other premiere’s such as Ed Keazor’s Lagos: 1861 – 1960 The Growth of a City of Style, a documentary on the changing sounds and faces of the megacity through time. Ghana’s rising acting star Maame Taa Boafo of the popular web series An African City shows her versatility in Alfonso Johnson’s ‘Olive’ (2016) and ‘The New York I Love’ (2016) directed by Nigerian-American filmmaker Iquo Essien.

Also showing is Intore (2014) by director Eric Kabera who examines the healing power of dance as Rwanda reeled from genocide and ‘Tunde’ (2011) an hour-long film by American filmmaker, Ron Wyman puts the spotlight on a contemporary musical genius, Tunde Jegede. There will also be conversations between screenings.

In a statement about the theme, Ugoma Adegoke, the Creative Director said, “We have chosen this theme because we want to connect with people through what makes them happy. We all have a song that makes us happy or sad, one that makes us want to jump on our feet or a tune that reminds us of a cherished person or moment. So how about exploring these feelings through film?”

Music Makes the People promises to be a feast of sounds, rhythms, emotions and moving images dedicated to screening the best of emerging, fresh, independent African cinema and in particular celebrating the musical voice of film as an art form.

Check out the schedule and synopsis of the films set for the festival: 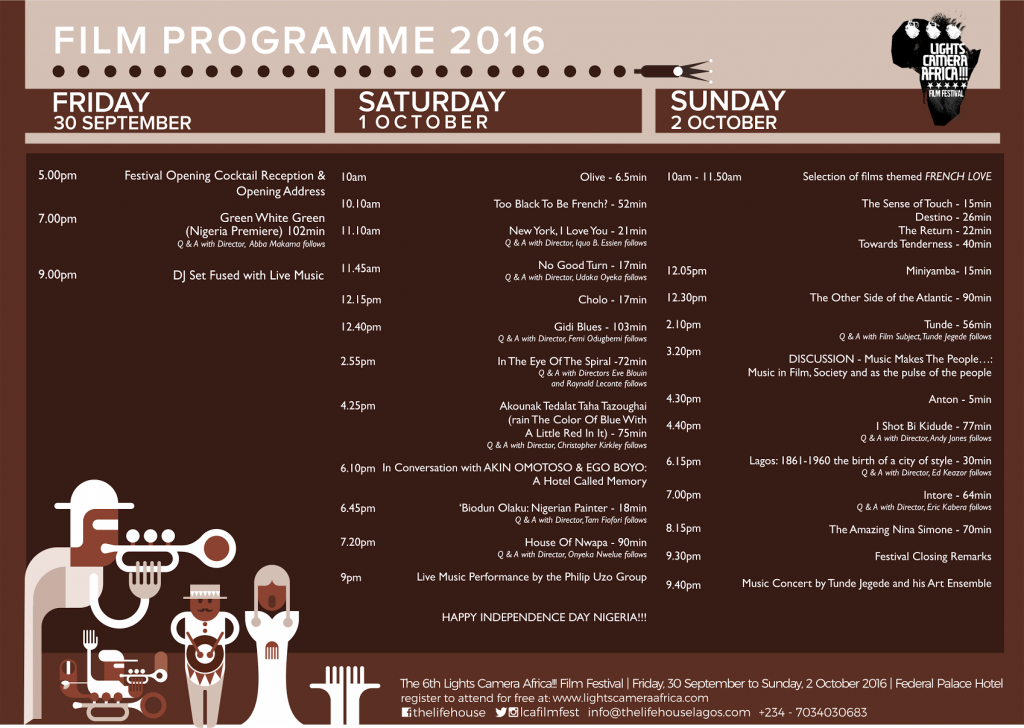 A group of young bohemian artists hang out and search for direction in their lives in the stagnant months leading up to the beginning of their university studies, in this richly textured and frequently funny look at Lagos’ new generation. Hip, modern, and bursting with creative energy, this is the look of young Lagos. Uzoma and his friends are on the cusp of adulthood, feeling directionless in those stagnant months before the beginning of their university studies. They spend their days playing video games or competing in impromptu yab-offs, improvised insult matches where the quip that gets the most laughs determines the winner. They’re conscious of the varied cultures of Nigeria’s Igbo, Hausa, and Yoruba ethnic groups, but they’re as likely to play those for laughs as for beef. These young bohemians are also artists: painters and filmmakers looking to hone their crafts and tap into their own reservoirs of inspiration. Self-taught painter Uzoma struggles to sell his work on the street, and will readily wait all day at a local art gallery for a chance to speak with the owner. Baba experiments with his first short film, even if the set is just his own backyard. If inexperience is a barrier, then persistence and fearless ambition are their secret weapons. It’s a can-do way of life that feels perfectly Lagosian; these guys are right at home in this city whose population of 21 million is always on the go. Richly textured, funny, and a bit cheeky, Green White Green presents a cityscape reminiscent of a Spike Lee joint, with its vivid colours and vivacious inhabitants.

Akin is an indulged playboy from an affluent family who accidentally meets an interesting beauty in an unpredictable place. Nkem is a beautiful, confident but unusual young lady who devotes herself to her work as a community volunteer in the belly of the city’s worst slum. Their encounter drags them both into a whirlwind experience that unravels their world.

The House of Nwapa chronicles the story of Flora Nwapa, considered as Africa’s first female novelist published in English. A string of narratives and interviews, featuring Nobel Laureate, Wole Soyinka, children’s literature writer, Mabel Segun, German anthropologist, Sabine Jell-Bahlsen and former Heinemann editor, James Currey. It details who she was and what she represented.

Olive is a short film that explores betrayal, heartbreak, and chance encounters. The film was inspired by the song O Mistress Mine written by William Shakespeare and performed by Caleb Eberhardt of the hip hop/jazz duo Quincy Vidal.

TOO BLACK TO BE FRENCH?

In this documentary film, Isabelle Boni-Claverie explores the role of race and the persistence of racism in France, as well as the impact of the French colonial past. Through an exploration of her personal family history, and interviews with historians and academics, TOO BLACK TO BE FRENCH peels back the layers of race relations in supposedly institutionally colourblind France. Boni-Claverie, a French-Ivorian, who grew up in upper-class French society, unpacks how socio-economic privilege doesn’t mean protection from racial discrimination. She solicits anonymous individuals to speak on their daily experiences with race, class, discrimination and micro-aggressions. The film also features interviews with acclaimed sociologists and historians including Pap Ndiaye, Eric Fassin, Achille Mbembe, and Patrick Simon to help contextualize racial history in France. Boni-Claverie’s film starts an urgent discussion on French society’s inequalities and discrimination.

About A Mother is a compelling story about a mother raising her three boys, and the power of sacrifice, familial love and particularly strong hair.

AKOUNAK TEDALAT TAHA TAZOUGHI (RAIN, THE COLOUR OF BLUE WITH A LITTLE RED IN IT)

Akounak tells the universal story of a musician trying to make it against all odds, set against the backdrop of the raucous subculture of Tuareg guitar. The protagonist, real-life musician Mdou Moctar, must battle fierce competition from jealous musicians, overcome family conflicts, endure the trials of love, and overcome his biggest rival – himself. Stylistically borrowing from the Western rock-u-drama and an homage to Purple Rain, the story was written with and for a Tuareg audience, drawing from experiences of Mdou Moctar and fellow musicians. Carried by stunning musical performances from Mdou, the film is equally a window into modern day Tuareg guitar in the city of Agadez as it is an experiment in modern ethnographic filmmaking and new techniques of cross-cultural collaboration.

THE OTHER SIDE OF THE ATLANTIC

This is a documentary that builds a bridge in the ocean that separates Brazil and Africa. The film tackles the cultural exchanges, the imaginary created through the mirroring, the prejudice and dreams built in both sides of the atlantic through the life stories of the students of African countries in transit through Brazil.

In the Eye of the Spiral details an artistic and philosophical movement born in Haiti called Spiralism, which has spread across the arts, touching upon spirituality and even politics. Featuring narration by Annie Lennox and the music of Brian Eno, the film sheds light on the state of a country hit by corruption and natural disaster, and the incredible will of Haitian artists who produce art as a personal form of redemption and survival.

Anton is the story of a young German boy who longs for his father living in Africa.

The dark-skinned 11-year-old Cholo meets his fair-skinned younger stepbrother Abdullah for the first time when their father Said arrives in Muscat. Although strikingly different, the boys have great chemistry. Cholo is a 10-year-old boy full of imagination and a great love for nature and life. But jealousy, competitiveness and curiosity arise between the two, as they go through a journey of self-discovery.

She was left out of Civil Rights history, erased by jazz critics, and forgotten by most Americans because no one knew how to categorize her greatness. But throughout the 1960s, Nina Simone was both loved and feared for her outspoken vision of Black Freedom. Her musical proclamations like Mississippi Goddam, and her iconic style gave voice to people of all colours facing oppression and continues to empower today with its unrelenting appeal for justice. Yet, Nina is often remembered more for her fiery temper, scolding of audiences and her subsequent abrupt departure from the United States. With this film, we get one step closer to understanding the woman who has given fans moments of pride and opportunities to cry in solitude. We gain a deeper appreciation of Nina’s music, and an understanding of the events leading to their creation. We continue her fight for freedom for all people, and introduce younger audiences to the songs that inspired us. We help preserve and understand the Amazing Nina Simone.

Two young guys from the neighbourhood (Loïc and Mehdi) have set up a little business filming arabic wedding celebrations and then editing them in their minivan, their ‘audio-visual laboratory’. But when Mehdi starts to film the wedding of Leila, his pretty ex-girlfriend… Destiny happens.

A glimpse into the emergence of the city of Lagos as the iconic style capital of West Africa. This 30-minute documentary illustrates the fashion, the music, the trends and events that shaped an image conscious an iconic city. This era is brought to life with the images, video clips and music of the era, set to an illuminating background narrative by historian and writer Ed Emeka Keazor.

‘TUNDE’ is a documentary about Tunde Jegede, a master Kora and cello player who composes and performs a seamless fusion of African and classical music. He composed “Home Sweet Home” about squatters and homeless people five years after Hurrican Katrina in New Orleans (co-produced with Pulitzer Prize-winning author Dale Maharidge); and “ Murals of Belfast” about the power of art in the troubles of Northern Ireland.