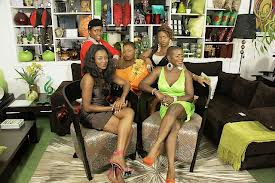 The first thought that crept up in my head when I heard LEKKI WIVES was how were they going to get people who wanted to be followed by cameras on a daily bases or get someone as daring and troublesome as Nene Leakes, one of the housewives from The Real Housewives of Atlanta’, one of the most prominent spin-offs of the ‘The Real Housewives’ franchise, turns out it is a story telling drama series created by Blessing Egbe. The Real Housewives is a reality television series, following the lives of affluent, bourgeois housewives and professional women in the suburban or urban areas of several American cities.
Based on the concept of the hit television series ‘Desperate Housewives’, these shows features women married, single or divorced focusing on trivial, realistic issues, as well as issues that are seen as a taboo. Like the saying goes, there is nothing new under the sun, so is it with the Lekki Wives. The 13 episode series (it was actually follows the lives of 5 women in Lekki axis doing what they can to survive. Cleopatra or Cleo for short; the Trophy Wife, Lovette (pronounced the local way); the Over Achiever, Miranda; the Bully, Uju; the Ambitious, Peace; the Zealot.
I must say, it was a nice effort and different from the usual from Blessing Eghe, the actress turn producer, turned director, the scenes were precise, the plot had me spell bound to the extent I wondered will the ladies get away with their evil ways. Casting wise, I believe the roles were handled properly and well played out, although there were times when I wondered whether Uju played by Katherine was calabar instead of igbo and why Lovette played by Kiki Omeili sounded childish.
After watching 7 episodes, it got predictable and shallow and ended up like most of our movies normally do- Death and the Christian factor, not like I hate driving morals the Christian way, but not all moral activities need to be powered by the church. I was also disappointed, that Blessing could only pull 13 episodes when a normal series has 20-25 episodes (guess she set naija standards), but it doesn’t seem like there will be any continuity except if Blessing can pull some sort of heart trick.
Generally, it was a nice try, due to language and some sort of explicit content, I don’t think it will make network TV, but I do wish it could (maybe Ebony Life TV will take it on!) The story telling parts had some dry moments, as the actresses could have done with a wardrobe change now and then. I had to purchase 2 different DVD’s as the series was sold as Season 1 & 2 instead of one.
It was a nice try and this drama series earns an easy ‘B-‘ from Xplore.
No votes yet.
Please wait...
Voting is currently disabled, data maintenance in progress.