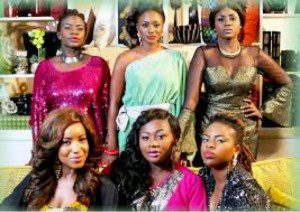 Written By– Blessing Effiom Egbe
Starring– Kiki Omeili, Adaora Ukoh, Keira Hewatch, Katherine Obiang, Chinonso Young, Joselyn Dumas and Anthony Monjaro
Genre– Drama
Run Time Disc 1: 4:07:33
Run Time Disc 2: 5:04:15
Production Year: 2013/14
At the end of the first season, I didn’t think producer, director and writer Blessing Egbe would be able to produce a season 2 due to the way season 1 ended. But a alas  she pulled it off and viola, there is a season 2.
Lekki Wives Season 2 mirrors yet again the lives of Cleo, Lovett, Miranda, Peace and Uju after their ordeal in the hands of the different men in their lives. This season had in addition Aisha the pimp, whose husband is a drug baron and a psychotic rapist.
While I didn’t know what to expect, I would say that I was pleasantly surprise that Mrs Egbe was able to pull this off and she did this all by herself. Kicking off with the technical aspect, I would say bow down to Blessing Egbe! Set locations were on point, cameras angles were clear and crisp. Sound quality and lightening which is usually a bogging nightmare  went pretty smooth from beginning to end. As you know, Lekki wives is kind of modeled after the real housewives series and this season, the wives brought it.  The costume designer must have carried out her research on the women this time as make-up, hair, the lashes and the clothes provided by Zizi Cardro, Suchille, Ameriles, DFL and Ejiro Amos Tafiri made them stand out and appear as the overly top, desperate women they were.
In terms of the characters, Lovett was my champion. She was the only one out of the clan that had added game to her character. From season 1, she was timid and had that aurora that she could be stepped on. This season, she was the sleazy, conniving b*tch, that refused to backed down even when she was clearly in the wrong. Cleo, Miranda, Uju and Aisha, also carried their roles well, sometimes the roles seemed over stretched, but they added their bit to the overall script which by the way was well thought out and apt. How Blessing managed to come up with and maintain the momentum for the different scenarios is worthy of commendation.
My main reservation however, comes for the character played by Keira Hewatch, Peace. While I felt in season 1,  she was being a zealot wanting her friends to believe her views and act accordingly, this season her character was seriously dampening and not impressive. Not that she had many appearances in the whole season, which came to me as a blessing in disguise, but the manner in which she narrated her experiences that were heart breaking did not connect at all. Agreed she speaks fast, but when a lady is raped especially by someone she loves or otherwise, she is broken, her pride is dampened and she is totally disgusted(putting it mildly). Peace waltz through the whole narration and was purely emotionless. Even Cleo gave a better performance when she was raped by one man talk less of someone raped by 3 men. As if that wasn’t bad enough, when her daughter was molested by her father, Peace didn’t give that heart breaking performance of a woman who was battling that dilemma. She spoke so fast that there was a doubt as to the way she was truly feeling.
Less I forget, the men  or man that also made the production a success, Anthony Monjaro who played Victor also did an okay job. His addictive ways were extremely funny and worthy of note, hoping to see him in more productions this year as well.
While I commend the script and extensive story line, I will add here that by episode 8, the energy had began to wane. Wasn’t totally blown by the ending, but if you have watched it, I would like to know your thoughts in the comments section.
Lekki Wives Season 2 has created a standard I hope to see in nollywood production for the year 2014 and for that sole act, the production gets 8/10 from Xplore.
No votes yet.
Please wait...
Voting is currently disabled, data maintenance in progress.