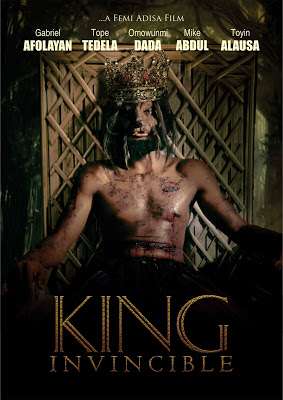 Nollywood is moving at a fast pace and there are good writers, directors and excellent actors emerging every day. On “King Invincible” Tope Tedela and Gabriel Afolayana give beautiful performances that elevate the film.

An ailing king and a land in turmoil is the first thing we notice in the film`, “{King Invincible”. The story is set in a fictional Yorubaland land. The land is at war and with the bravery of a young slave named Taari (Tope Tedela) they are able to win. As a reward Taari is adopted by the ailing king and he is set to marry Princess Morenike (Omowunmi Dada). Morenike and Taari defile the gods when they fornicate and as a punishment for his sins, the gods target Taari. He is punished with “the curse of the dogs” he acts like a wolf and half of him remains human. As a result of this, he has to travel far into a wild forest to get the cure to this curse.

King Invincible starts out well; it is quite the intriguing story. It is a great feel of the old Nollywood, when we constantly enjoyed epic films with different tales. In 2015 “The Antique” gave us the old Nollywood vibe starting out the year is “King Invincible”. The story is easy to follow and even though it is intriguing, it looks like a story right out of “Tales by Moonlight”. The story looks and feels familiar. The dialogue is however, very impressive, very intelligent. It is packed with a lot of intelligence. The dialogue pushes the storyline forward, it makes it more intriguing.

The glory of “King Invincible” goes to the actors especially Tope Tedela and Jude Chukwuka. Omawunmi Dada’s performance is quite problematic, her performance felt staged, it felt different and was not in sync with the others. We would have a conversation about Gabriel Afolayan’s impressive turn another day.

This is a passion project for the director Femi Adisa and he proves this in organising good actors and equipping them with the right opportunity to train and meet up with what he wants. For example, the fighting scenes in “King Invincible” are highly impressive. We have the first fight scene that looks natural and something straight out of an American epic but the best thing is that the first fight scene is not the only great fight scene. The actors or the stunt men do a great job of delivering a well organised and well thought fight sequence. Another thing worth noting is how Jude Chukwuka performs his role as the ‘Wise man”. According to reports he trained for the role and it is really interesting to watch how comfortable he was on screen. His character was needed and he serves as the most memorable in the whole story.

King Invincible does well visually. The story may have its mishaps but it does not disappoint in terms of sound or picture quality. It was beautiful watching it.

Xplore rates King Invincible with a 6/10

Next Post ‘The Guest’ ponders on themes of Infidelity, Mental Illness & Goodwill but it establishes none!