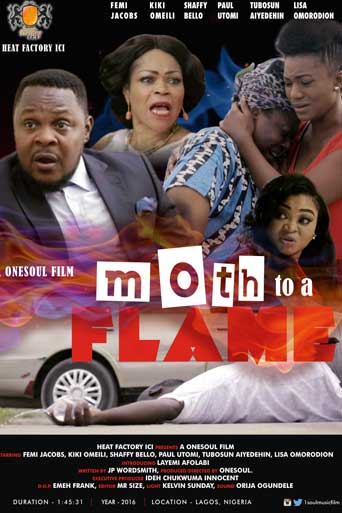 Her father (Layemi Afolabi) works as a taxi driver but gets knocked down and hospitalized. Before he dies Joan decides to play the taxi driver to raise money for his medical bills. It is here she meets a very rich Mr. Ford (Femi Jacobs) and becomes his personal driver. Ford is a man who is hardly impressed by a lot of things.

A quick-witted Joan quickly works her way into his heart, both of them oblivious to the fact they were starting to fall in love. Then the boisterous Rosaline (Lisa Omorodion) arrives in Lagos. She’s Ford’s fiancé, and this is where the movie’s excitement really kicks in.

Lisa Omorodion was literally the game changer in this script. She amped it up. Her makeup (Ajoke Omiyale) and jealousy, both very heavy, really helped project the lousy nature that Rosaline (the character) was supposed to have.

Tubosun Aiyedehin (Kpians: The Feast of Souls – 2014) plays Omeili’s mom, contrasting their roles as Mrs. and Mrs. Johnson in Mrs & Mrs Johnson. She brings all her worrying talents into this piece. Her ego was permanently looking out for something to feel bad for.

In a scene we find Femi Jacobs saying goodnight to his mom in a living room with two windows behind them that showed it was still daytime.

Paul Utomi (Lekki Wives – TV Series) was exceptional. He played Joan’s younger twin Keny, and his costumes (by Deborah Ogunlana) were the right match for a clergyman. I loved the jazz (by Orija Ogundele) that introduced Femi Jacobs (Taxi Driver: Oko Ashewo – 2015) when his car ran into a fault. I also liked the camera angles (Imeh Emmanuel Frank) and how the rearview mirrors were over-used.

Produced and directed by Onesoul, Moth to a Flame was absolutely entertaining and earns a 7/10.

Catch the trailer below.