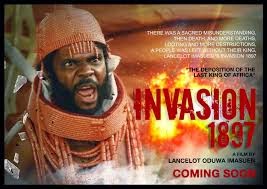 Director- Lancelot Odua Imasuen
Writer- Ossa Earlice
Cast- Mike Omoregbe, Rudolph
Walker, Chucky Venn, Segun Arinze, Paul Obazele, Annika Alofti, Garett Mort and
Tim Robinson
Time: 1:25:45
Year: 2014
Genre: Historical Drama
May the King live long… Benin Chiefs
I had seen Invasion 1897, during the AFRIFF 2014 but just made time now to write about it, please forgive me.
The movie opened up to a research student Igie Ehanire (Charles CHUCKKY Venn) from Benin receiving lectures on the history of the Benin Empire. Igie gets more perturbed learning about the British invasion of Benin and the removal of certain art works and historical documentation of the records of the Benin people. In his bid to correct the wrong meted out to his people he is caught. In trying to justify his action he narrates the events that led to the capture of the greatest king of Africa Oba Ovonramwen of the great Benin kingdom, who until 1897 was the only king and kingdom still standing in the whole Sub-Sahara Africa.
Invasion 1897, is the 2nd movie of 2014 that brought me closer to understanding the situations and happenings of Nigeria back in the days. While October 1 is a fusion of fiction with a bit of facts, Invasion 1897 is a purely biological drama film about the Oba of Benin Kingdom, Oba Ovonramwen.
Enter Mike Omoregbe (names seem similar sef!) a relatively unknown in the movie industry that plays the Oba. As a revered leader with his towering height, he is unflinching, carrying out executions for the town to see. As a tyrant he was quiet the act, literally refusing to be swallowed by the policies of the British and placing them at arm’s length at all times. It felt good to see that the British did not always get their way as Oba Ovonramwen must have been one of those rulers that kept them on their toes.
For his Chiefs, their scenes were a good to watch and drove home the fact that people will always have opposing views, so take the time to understand or listen to other people’s opinions. Of course majority of them felt they had no business with the British or their ruler, but there were those among them that felt having a relationship with them might not be that bad and that is where Chief Obasaki comes in. Stabbing his people in the back might not have been the way to go, but hey! One could literally see the fear and joy in his face when he agreed to the treaty. Segun Arinze and Paul Obazele delivered to their roles as well as a host of others.
The colonial government played by Garett Mort and Tim Robinson erm… not so impressed. Not sure if they are professional actors or have any work to their credit, they just didn’t flow like one would have expected. On the other side (that is over in London), Chucky Venn popular in the UK for his role as Ray Dixon in EastEnders pulled his weight alright, turns out he is a Nigerian from the Eastern part of Nigeria. I also enjoyed the court scene and the judge.
Moving on to other aspects of the production, costumes especially for British soldiers seemed more 1960’s than 1897, for the Oba and his chiefs well it was a wrapper, so does that count? The war scene was epic, we still need loads of work in choreography and how to kill and die properly, but it wasn’t so bad. The props of arrows, guns and canons were spot on, not sure how they got the images of the artifacts or how the replicas were made but work went into making it look believable. Visual
effects, how do I say this, we know some aspects are not real, but it was pretty obvious that it was fake, so there is also room for more improvement in that area. Kudos to the crew for the work done, there’s loads to be factored in to make it better, but they have taken a step in the right direction.
When a script is impressive, both foreign and local, I marvel and for some reason, I try to think what was going on in the writers head, what exactly are they thinking, how did they know this kind of reaction will be elicited and Ossa Earlice writer of this script did just that for me. The lines were powerful, the language, ceremonies and behavior of Benin people were well portrayed. However, what is a script without a director to drive the cast to deliver and Lancelot Odua Imasuen did just that. Coupled with the fact that this is close to home, Lancelot brought a  historically inspired character to life in a way I haven’t seen in our Nigerian productions. There was good synergy between the script and the director and for our 2015 awards seasons, I see Afolayan’s October 1 and Imasuen’s Invasion 1897 going head to head.
Invasion 1897, was a brilliant production and earns a 8/10 from Xplore.
Rating: 1.0/5. From 1 vote.
Please wait...
Voting is currently disabled, data maintenance in progress.