Wednesday, 28 Sep 2022
By Turidee - January 11, 2014
32 0
Director – Rukky Sanda
Written By– Rukky Sanda
Cast– Rukky Sanda, Oge Okoye, Yemi Blaq and Ikay Ogbonna
Genre– Drama
Run time– 1:30:15
In her shoes mirrors the lives of two village girls who dream of making something of themselves in the big world. Funke played by Rukky Sanda, who wrote, produced and directed is the local tailor who wants to be a big time Lagos fashion designer while Peju played by Oge Okoye, is the no nonsense village champion who believes fighting with everyone and sleeping with every man will get her to her final destination and that’s Lagos.
In terms of characters, not sure it’s just me, but nollywood’s portrayal of poor village girls is totally lacking depth. Without giving out much, it has been said that village girls are probably more exposed than city girls so all the tying of wrapper and weaving their hair and total lack of village girls mannerism doesn’t depict how village girls or ladies act.
Sure, there was the drive to be successful which both Oge and Rukky displayed. Oge played her role as dutiful wife well (nothing outstanding) her beau Yemi Blaq the ever charismatic gentleman was also nice (same here! nothing stood out) as for Rukky Sanda, while she played the fool been led by Peju, it was a Rukky I hadn’t seen before and was beginning to appreciate until the time she opened her eyes (like most of the movies plots go) it was the same ol’, same ol’ over again.
As for Rukky’s directorial features, I’m not sure what follows in the minds of our nollywood stars when they feel, I should transition to directing? Is it a knack, a drive or just a belief that I can do it? Because if compared to the Hollywood peeps directing, most of them had been acting for ions before they moved to directing and even once in a while they prefer to be directed, so I don’t understand what the rush is to direct when the rudiments of acting you are still trying to pick up.
“In Her Shoes” was a pretty safe movie and okay to watch. My mind drifted to the Hollywood movie “Something Borrowed”. Where Ginnifer Goodwin is treated like dirt by her friend Kate Hudson who gets engaged to a guy she loves but has been to shy to say anything.  While our nollywood movie doesn’t swing that way, but I guess this movie must have guided her thought process.
Before I rate this movie,  I will like to add this twit from a nollywood director, @oludascribe: “if a person can be in 30 films and there is virtually no diff in each performance. No matter how popular, they are not actors they’re puppets”
In her shoes gets a 4.5/10 from xplore. 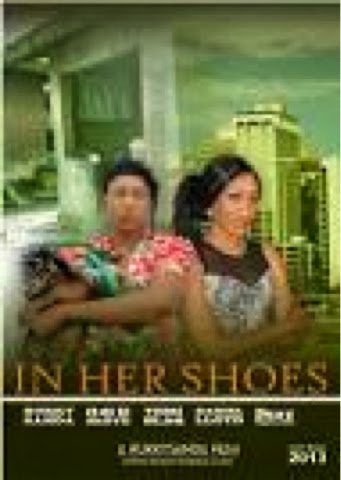