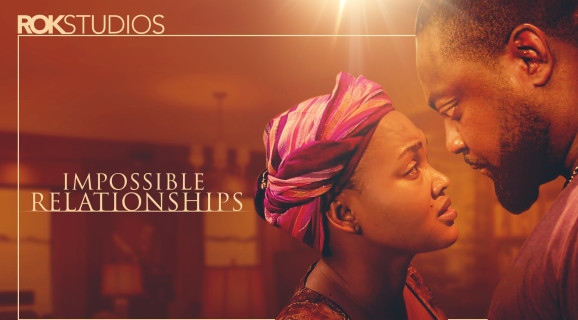 Poverty is a nasty thing! It takes away a lot of privileges that normally should be enjoyed by every human being. It is poverty that inspires the story in “Impossible Relationships” and it is a commendable story.

Ann (Mercy Aigbe) is a widow who sells plantain to cater to the needs of her children, Susan and Mark. She is overprotective of them as every mother should be of her children. They go through a series of challenge but one kind act leads to a better job for Ann, the only problem is that the peace she had while sitting on the roadside and selling plantain is lost as soon as she takes on a job as a cleaner in the house of a young and vibrant man named Malik (Yemi Blaq).

I love a story with a purpose and “Impossible Relationships” has a purpose. An applaudable purpose. The film starts with a neighbor reporting to Ann that one of her neighbor has just tried to sexually harass her eight year old daughter; Ann drops everything, runs back home and engages in a physical altercation with her neighbor. The scene takes the first important minutes of the film. A mother’s anger on a pedophile and her resolve to viciously protect her kids is the first message we get from the film. It also highlights some of the struggles poor women go through to protect their children from such barbaric act. When Ann decides to report the case to the police, she is reminded that the money that would be spent convincing the police to fight the case is the money she should use to fend for herself and the children and so she lets it go but not without growing a fierce consciousness for her kids, especially her daughter. In fact, in the very next scene her daughter follows her to the shade where she sells plantain. The writer is careful not to depict any other issue of child abuse and instead of sell with her mother; Susan just sits by the shade and observe her mother go about her business.

It is a story with depth and compassion and it comes from the perspective of a poor woman and her struggle to provide for her children. Ann helps Malick to repair his car and she gets a job for twenty five thousand, it changes her life. The money is an opportunity for them to live a better life but when she gets there, she meets a cook who has assumed the job of the madam. She makes her life difficult but Ann’s compassion is overemphasized by the writer and it is interesting to guess why the writer makes a conscious effort to make Ann a figure worth emulating. Even when her rich boss falls in love with her, the writer does not portray Ann as desperate; her dignity is in check till the very last scene- this makes the script highly enjoyable.

Mercy Aigbe is effortlessly Ann. She carries the role with grace and she is the reason why we love Ann. The only problem we have is when she switches between Pidgin and English. That is to show us that Ann is not an illiterate but condition has placed her where she is. She thrives more in Pidgin and we enjoy her performance more when she dwells on Pidgin.

The female actors make their screen time worth remembering. An exceptional performance is from Allwell Ademola who plays Mama Charlie and when May Owen appears in just one scene she lights up the screen as the unruly baby mama. Another performance worthy of note is the bully Pei Pei played by Blessing Onwukwe. The humour is there and does not swallow the story, the actors spice the script and make the film what it is on screen.

The picture quality is however problematic. It goes from clear to blurry and then the circle continues. I don’t know if to blame the film producers for this oversight or if the problem is from iRoko TV but it was quite distracting, it is the first scene that saves the movie. If it was not endearing, I would have watched something else.

Xplore rates Impossible Relationships with an 8/10.