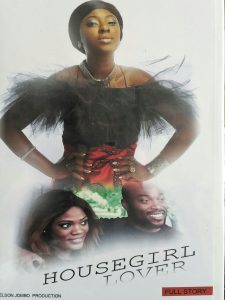 There are films that do a great service to entertainment by dishing stories that are regular but are spiced up with over the top antics. There is an unusual creativity that comes from Ijeoma Cythia Kalu while writing “Housegirl Lover” the name might not be the typical-rush to watch movie but from the first scene she serves entertainment and her creativity shines through.

Debby (Bayray Mcwizu) is a university graduate in need of a job. She moves to Lagos to squat with a good friend Ginika (Yvonne Jegede). She sees that Ginika has a flourishing life; she has a great house and looks too fantastic for a secretary, Debby asks her friend to help get her a job at her office, but jealousy will not let this happen. Instead Cyn introduces her to her boss Emerson (IK Ogbonna).

Emerson wants to take advantage of Debby but Debby believes in herself and knows that hard work will get her where she aspires to be and so she does not compromise. Ginika attacks and ensures that Debby does not get a proper job. With the challenges Debby settles as a house administrator for Charles (Seun Akindele) who is having problems with his girlfriend Gina (Adunni Ade). We expect Debby and Charles to fall in love, because when they meet he is mean to her and she is bold to tell him that he is not a nice man. This, however, does not happen. Debby instead meets a man (Daniel K. Daniel) at the bar; he is kind to her and even takes her in when Ginika pushes her out of the house. Ifeoma (the writer) creates unusual situations for Debby.

Few have Emerson who insists on the love he has for Debby and eventually Housegirl Lover ends as a tragedy. We do not see this coming. Ifeoma writes well for the first half of the film but her exhaustion reveals itself in the last few scenes. By trying to portray a heroic story of love with Emerson dying while saving Debby, she lets her script down. She also confuses the script by not explaining the end of important characters, for example Daniel (Daniel K. Daniel) who was helpful and a good man to Debby. There is no concrete reason for the way Debby treats him and eventually forgets him. We never hear of him again. You do not build a character and let them go without a sustainable reason, and Ifeoma does that.

The directing is superb and the visuals and sounds of Housegirl Lover is good. The acting is wonderful. Bayray Mcwizu is exquisite and Seun Akindele is a professional. Yvone Jegede does well as the scornful friend and IK Ogbonna give it his best.

Housegirl Lover earns a 6/10 from Xplore