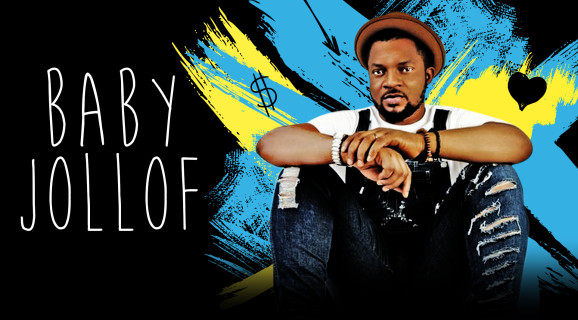 Baby Jollof, written and produced by Henry Azukaobi follows Chigozie (Walter Anga), the centre of ridicule in his family and community. He’s a painter who’s career isn’t doing him any financial good. He’s also in a relationship with Ehi (Tessy Oragwa) who keeps bringing him food. Being in love with him to a fault, she steals some documents from her father (a constantly livid Livinus Nnochiri as Aigbe), and sells her big sister’s house. Despite the consequences, she gives Chigozie the money to start a business, only for Chigozie to cart off with it and ignore her calls.

While at his hotel, he runs into and falls in love with an outspoken UK returnee – Sophia (Onyinye Okafor). She’s Ehi’s big sister – the one whose house was sold and whose money he’d been lavishing on foursomes. Onyinye Okafor (Hood Girls – TV Series) yelled a lot in this film, all the while playing a dogged mastermind. Gauging Chigozie’s dishonesty and disregard for her family, I still think at the end she let him off too easily.

Costumes, especially on Tessy Oragwa (Ada Mbano in London – 2014) and Walter Anga, were very catchy. The camera angles left me with nothing better to ask for. Locations and props (Ugo Jude Okoye) would have been perfect except for Aigbe’s room. It looked too scanty to be his sleeping quarters. The soundtrack and make-up (by Aremi Gbasin) had one thing in common, they began getting better as the film drew to an end. Editing (X Walex) and continuity was a pleasure and not a second of the two-hour-plus runtime felt like a waste.

Baby Jollof gets a 7/10 for no other reasons than its award-winning screenplay. Catch the trailer below.

Catch the trailer below.