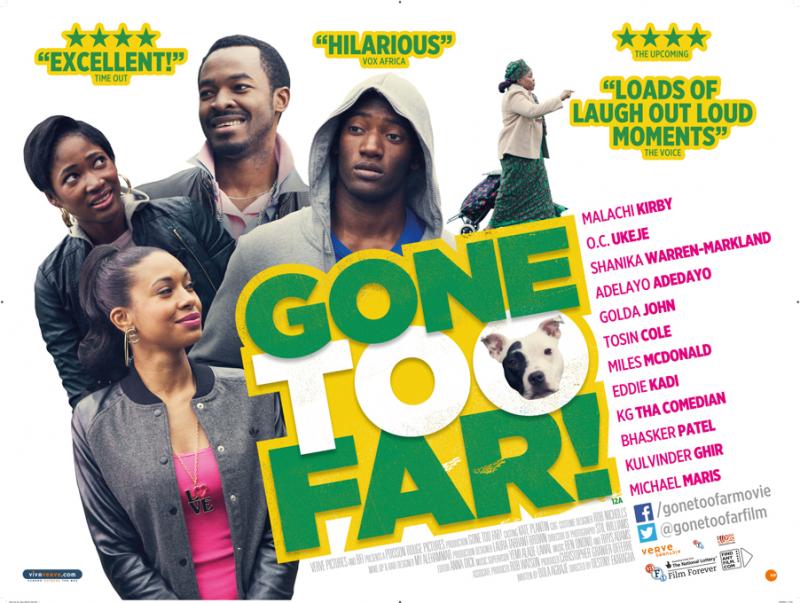 What is the best way to start a discussion that is important and get it across to a broader audience? Of course, make a comedy! Destiny Ekaragha and Bola Agbaje do just that and in Gone Too Far, which was one of the most buzzed films of 2013, they collaborate and strike a balance between enlightening the audience on culture clash but also they manage to relax the audience by making the story a comedy, which is a genre we can all agree to love.

Ikudaisi (O.C Ukeji) visits his brother in London. Their last interaction was when Yemi (Malachi Kirby) was three years old and that creates distance between the brothers. Peckham is where Yemi lives; it is home to most Nigerians in London but Yemi finds the behavior of his family members embarrassing. For a simple errand, the brothers spend more time arguing and what we get is fantastic humor. The conversation is sharp and above all it is not just two brothers bickering but also a conversation on how Nigeria differs from London and how two brothers have experienced two distinct cultures and how this causes a clash between them.

The story is the greatest achievement of this project. It is recommendable, sharp and fantastic. I mean it takes a genius to be able to create a story with such an important message on culture clash and yet so much humor. We are able to laugh and we also learn from the story. The actions are swift due to the writers ability to create an environment that envelopes the viewer to experience and also acknowledge the two brothers.

Golda John does a fantastic job of playing mother to Yemi and Ikudaisi, she birthed the two brothers that cannot seem to get along and she is at the center of the whole story. I absolutely loved the performance of Shanika Warren-Markland (Armani). She was the center of attention for the boys, especially Yemi who is in love with her, but for Armani, Yemi is only a companion to make her ex-boyfriend jealous and this makes for another hilarious venture. All in one film!

Then there is O.C Ukeji and the man himself, Malachi Kirby. While O.C represents the Yoruba culture. Malachi is the representative of the London football loving, girl-chasing young man. Their chemistry makes the film. They quarrel a lot but it takes two good actors not to make us bored and it also took the genius of Bola Agbaje to make this a reality.

The director Destiny Ekaragha puts a good script in the hands of good actors and then behind the camera, she makes sure that it works and what it translated to is this beautiful film we end up seeing. Gone Too Far is a low budget production that proves that money is not always the problem.

Visually, I also enjoyed watching the film. We get many comedies about Nigerians in London and I’ve not seen one that is not bone-cracking hilarious but Gone Too Far takes the cake. It deserves the entire rave it got in 2013.