Know more about the director here… 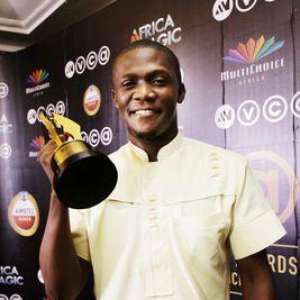 Genevieve Nnaji is making a comeback! After releasing “Road to Yesterday” in 2015, we did not hear from the actress/ producer again. Recently, she teased fans by uploading a picture of a script “Lion Heart” online. She is back on set and she will be taking a leading role. To some people the director helming the affair of this production sounds new, it is the same way Ishaya Bako sounded new to many people.

Lion Heart is an adaptation of a novel. The script is ready and we cannot wait to see the film. To clear your doubt and give you more facts about the director, here are some things you should know about the director.

His Full name is Chukwudi Joseph Obasi: The director is known as CJ Obasi but what many don’t know is that CJ stands for Chukwudi Joseph. He is also often referred to as Fiery Obasi and he describes the “Fiery” nickname as something that has always been there because he always knew what he wanted to do.

His debut film is titled “Ojuju”: Ojuju features a young man called Romeo, when an epidemic hits their community, Romeo has to collaborate with his neighbors to battle this epidemic. Ojuju was screened at several film festivals both home and abroad and has won him a couple of awards. He followed the success of Ojuju by releasing O-Town, which continued his quest at creating the “O” Trilogy.

He made Ojuju on a Zero-budget: When it is difficult to get investors and the story is too good to do away with, you make films on a zero-budget. It is what CJ Obasi did with Ojuju, it is perhaps what made the film even more impressive, the zeal and struggle dedicated to bringing the work alive is highly commendable. Ojuju is the shiniest work on his portfolio yet.

In 2015, he won the Trailblazer Award at the AMVCA: His film Ojuju sat well with the jury at the AMVCA. His love for the horror genre got him the Trailblazer award. After reviewing his work for the past year, he was invited to accept his award.  An action not to be forgotten in AMVCA history is how he stomped on stage and practically pulled the award from Ivie Okujaiye. There are many interpretations to that action but we can only describe it as the anxiety that comes with such an honour.

He is inspired by Charles Novia and Amaka Igwe: In a 2015 interview, the director described his days of not making film as complete torture. He cites Amaka Igwe, Charles Novia, Teco Benson and Izu Ojukwu as miracle workers for the Nigerian film industry. It is because of these filmmakers that C.J has come this far himself.

Now you know about the director. We cannot wait to see what his collaboration with Genevieve Nnaji will turn out to. Judging by his debut work, Ojuju, there is a lot to hope for.

Next Post Teenage Lovers Re-unite in ‘Promises are Forever’