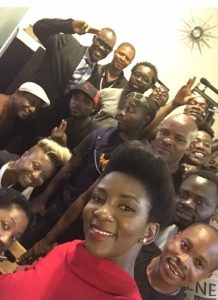 Genevieve Nnaji’s directorial debut, Lion Heart, wrapped up filming in Enugu on the 10th of May, 2017. She made this known on Instagram with a celebratory dab alongside co-star Nkem Owoh. According to the text: “…It’s been an honor to have gone on this journey with you. May God keep you safe and in good health…Thank you all for your love and support #itsawrap“.

Lion Heart was written by C.J Fiery Obasi (Ojuju, O-Town), being based on a screenplay by Ishaya Bako and Emil Garuba, and follows the story of an Igbo family who are into the transport business. Her first movie as a producer, Road to Yesterday (2015), won the Best Movie in West Africa at the 2016 Africa Magic Viewers Choice Awards. Genevieve is popular for her roles in Half of a Yellow Sun (2013), Weekend Getaway (2012), The Mirror Boy (2011), and Bursting Out (2010).

Even with the release date yet unannounced, the trailer is still hotly anticipated. Our fingers remain crossed.