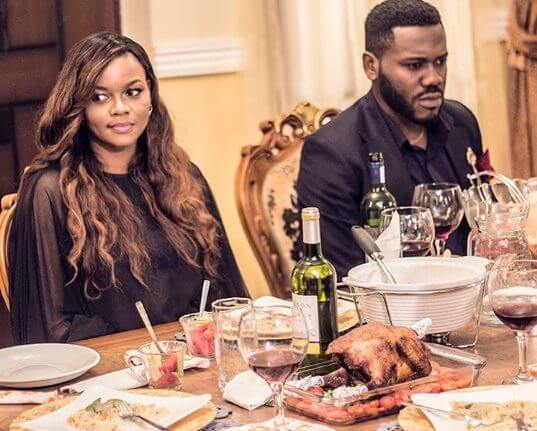 Dinner will have it’s theatrical release on the 20th of September, 2017, at the Cinéma Gaumont Saint-Denis, France. The film is acclaimed to be the first Nollywood feature marking a commercial release in France. Dinner, which opened in Nigerian cinemas last year November, promises to blow open silent taboos while questioning generally held views on relationships.

From the synopsis: Mike (Okey Uzoeshi) is invited by his childhood friend and buddy, Ade (Enyinna Nwigwe), to have dinner and spend the weekend with him and his fiancée (Kehinde Bankole) as they plan for their upcoming wedding. Mike decides to come along with his girlfriend (Keira Hewatch), as he plans to propose to her. Things get out of hand when they arrive at Ade’s house and find out secrets about each other’s relationship and the one person in the middle of it all.

According to Afrinolly, “Dinner is an enriching reminder that good acting, writing and directing intertwined allows for a profound film with real issues to be easily and seamlessly showcased and discussed in an open and entertaining manner.” The film is a Sidomex Universal production, written/directed by Franklyn Jituboh, and starring Okey Uzoeshi, Enyinna Nwigwe, Kehinde Bankole, Keira Hewatch, Richard Mofe-Damijo, Ireti Doyle, and Deyemi Okanlawon.

Previous Post Movie Review: “No Bride for Dad” features one of the best child actors in Nollywood!