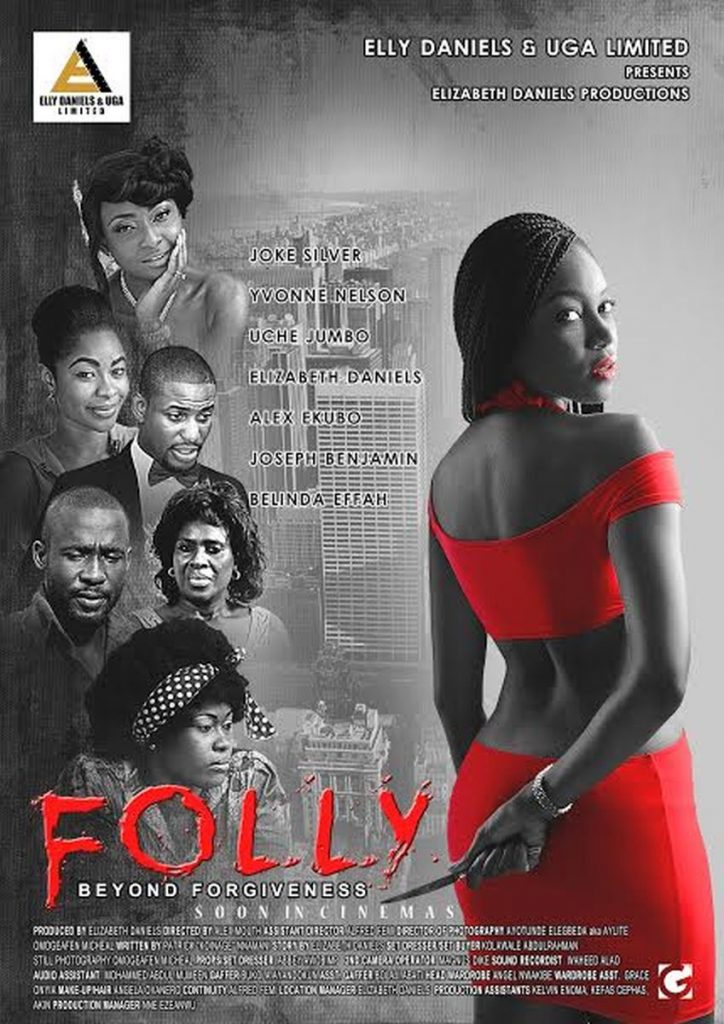 There are different films about alcohol abuse, some of them attempt to solve the problem, others make mockery of alcohol abusers, and “Folly” had a chance at sustaining us with a conversation on alcohol abuse but it focuses too much on the problem of abuse without offering a solution to the problem.

It is the story of two sisters almost re-enacting their mother’s past. Rhoda is a notorious alcoholic, she is able to remain sober for some days but when her daughter, April (Belinda Effah) is getting married, her excitement leads to abusing alcohol. She has an attack and as a result, she travels with her daughter for her honeymoon. It is while there she notices her elder daughter flirting with her younger daughter’s husband. It leads Rhoda to reflect on her life and how her addiction with alcohol came to be.  Alcohol was a form of escapism for Rhoda to deal with rejection. She watched her sister and her man start an affair. Her past enables her to guide her daughters; she sets them straight making sure that the past remains the past. We can learn lessons from the past but not repeat it.

Rhoda’s struggle with alcohol addiction forms the major part of the story, the only problem is that the main theme of the film which is alcoholism makes most part of the dialogue but the solution to alcohol addiction is not explored. Rhoda saves her daughters and by that she is supposed to gain some form of redemption but we don’t see her do that because her alcohol problem is not solved, there is no attempt to resolve it. The writer had an opportunity to use Rhoda’s past as a path to her recovery, as a path to her rejection of alcohol. “Folly’ would have been more enjoyable if we watched the matriarch find healing but the writer ignores this and instead, the focus is saving the marriage and the sisterhood of Rhoda’s daughters.

“Folly” is set in two eras. The 90’s and in the present time, we travel to experience Rhoda’s story as a result of her daughters. There is a balance between Uche Jumbo and Joke Silva. Uche is Rhoda as a young lady, Joke is the aged Rhoda. Uche Jumbo is able to handle the role so distinctly she makes us eager for the younger Rhoda and each time she passes it over to joke, there is a connection, and that is what good actors do. Belinda Effah is enjoyable, Yvonne Nelson is overtly sexual and it is the type of role that she has been typecast in over and over again.

Technically, Folly is well handled. It is directed by Alex Mouth who has contributed a number of short productions to Africa Magic, he is able to handle his actors with great professionalism and even though we question the story’s inability to answer the question it raises, we enjoy the actors perform. We enjoy how Alex is able to direct the audience to enjoy the film for its creative style of connecting past and present; it is what makes Folly enjoyable and recommendable.

Xplore rates Folly with a 6/10

Previous Post “Discontent” concentrates on teaching Women forgetting that Men have issues too!

Next Post #FlashBackFriday: 90’s TV Shows we want to be back on our screen!!!