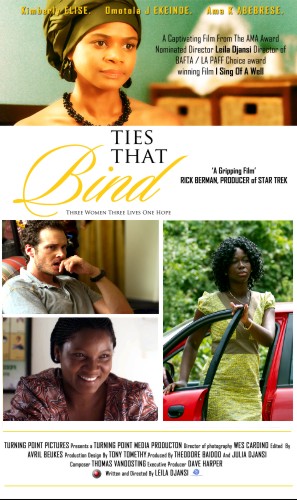 1. Emotions Run High: Ties that Binds centers on three characters, Adobea (Omotola Jalade) Theresa (Kimberly Elise) and Buki (Ama Abrese) three of them have carried the burden of losing a child but each has lost a child differently. While Adobea is semi-literate, the other two are well read.

Adobea is stifled by tradition and blames from her husband’s family. They believe she is possessed because she has lost many children and the true test of a woman is the capability of her womb and how it sustains the fruits of the womb. Adobea suffers as a result of this backward thinking by her husband’s family.

Buki on the other hand is undergoing counselling with her husband to save their marriage. Theresa their marriage counsellor also has to deal with the fact that she has not seen her daughter for years due to an addiction caused by Post-Partum depression. The stories of these three women link us to the trouble that exists with tradition, marriage, addiction, custody battles and divorce. We experience their stories in a way that does not just appeal to our emotions but convinces us to think about the problems that exist in our world. You might need a tissue to sit through this film.

2. A Female-Empowering Drama: Adobea and Buki were classmates and while Buki has succeeded in becoming a doctor, Adobea is dealing with loss and an illness she had no idea about but when they re-unite, Buki is able to help Adobea. They are also able to connect with Theresa and they offer succour to each other, they are able to fight through their problems because of the help they get from each other. Now if all women could think of each other as sisters, the world would be more conducive.

3. Fantastic Storytelling: Leila is able to tackle different issues and weave them into one big issue- the female problem. They all have to deal with different problems that women have to deal with in different parts of Africa. Theresa is married to a white man but what we see happen to her are things that can happen to women even in Africa. When a woman chooses to leave her marriage her children are taken from her, the difference is that Theresa is separated from her kid for her problem with drugs. In the case of Adobea, the story cuts across a lot of situations. The woman is blamed for bareness, the issue of divorce, addiction and loss are all well written and Leila provides us with a fantastic story that we recommend you watch.

4. Stellar Cast: Kimberly Elise spices this production. Omotola rules it as Adobea, the oppressed woman. And Ama K Abrese moves away from her comfort zone. Every scene is highly enjoyable because the actors understand the weight of this project. Even the supporting characters are able to keep up with the wonderful performances from the lead actors.

5. Amazing Cinematography: The locations are great. Visually the film is a wonderful job and Leila pays attention to not giving just a beautiful story but a crisp and stunning image.

Next Post Fighting For Hope and Promise In ‘Misconception’