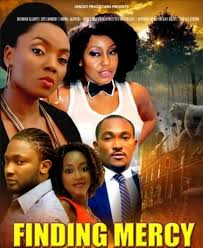 You rob my home, steal my child, put me through 10years of misery, then you want me to pat you on the back and tell you every thing is okay… Daniel Olatunji.

This two part movie from the stable of Denziot Productions depicts what it means to be in too deep (that is carrying a situation to far).

Rogers and Jato are best buds who basically grew up together. Roger cajoles Jato to accompany him to rob a rich man’s house who he perceives will be away and from that singular act, Jatos’ life takes a complete 360.

In terms of characterization, Jato played by Blossom Chukwujekwu (this is my first movie of his I have seen) felt too mellow and a bit disinterested. His energy came when his voice was high and he seemed easily forgettable. While he was the lucky one that got away, a part of me strongly believed he deserved punishment for his act, so thank God I didn’t write this script.

As it relates to Rogers played by Uti, I was extremely grateful he wasn’t the lead, which meant little talk time and scenes. He delivered to his short performance playing the ex convict working hard to change perception of his character. I cannot stress the need for upcoming acts to horn their skills at any opportunity they get, Uti’s performance seemed relatively okay.

Our movie veterans delivered to their roles, Rita the hypercondraic who seemed to be afraid of her past wasn’t bad, didn’t get hitting the battery on the head and relating it to been a mechanics daughter scene but hey! Chioma was also pretty alright, the dutiful wife, who found out after 15years of marriage, her husband was cheating on her, was pretty angry but not surprised. I believe Desmond, who played two roles of director and actor was my champion. He had the most powerful lines for his role, which he delivered too. The way his mood changed from the approachable boss to semi killer was laudable.

My WTH moment goes to the costuming, to be able to fit into roles, Hollywood stars go all out, I listed a couple of them (click here if you missed it) I believe, actors should be driven and go all out to deliver to their roles and if it means growing a beard then for heavens sake, grow a beard, that goes to Blossom and Desmond. For Uti  and his wig, I’m sure something else could have been done, but the looks on them where awful.

Another grouse for me was product placement. We understand its relevant, in terms of support and financing for the production, but when the product being referenced directs your attention away from the film and introduces unnecessary scenes, which aim to promote the products, then there is something obviously wrong.

At the end of the 2 part movie (wonder why that was),  there was nothing really to the hype. What this all boils down to is the fact that “Finding Mercy” is the usual nollywood movie which plies you with somewhat of a strong cast, but weak scripting and unnecessary scenes.

Mr. Eliot, Xplore adores you, but this production gets a 5/10.