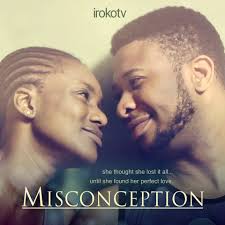 Misconception follows Jason’s life and his quest to find true love. Sam Sunny (The Prodigal, Restless Soul) plays this role with such drawn-out empathy that it brought me to pity. He desperately needed a woman who wouldn’t love him for his family name alone. He made up his mind to look really broke in order to find this woman of his dreams. How long he would have to put up with this new unnatural way of life was untold and unknown, not unless he was forming a new habit.

It’s one thing to have needless scenes, it’s another to have a lot of time wasting. This film had both in droves. The grand orchestra that ceaselessly played in the background (by Shola Olaiya) eventually became a bore of sorts. Why he chose to stick with Becky (Kiki Omeili – doctor turned actress) even though she was already taken by a furious David (Smart Conrad) puzzles me.

I couldn’t stop laughing when Kiki Omeili (Gbomo Gbomo Express, Disturbed) walked in on Sam Sunny talking to his Personal Assistant – Theophilus – played by Gold Franklin. In a bid to send her on another trail he introduced Theophilus as his boss. Gold Franklin couldn’t have handled this better and, overwhelmed with his new status, replied with “Don’t mention” to Becky’s “Good bless you sir”.

Intimate moments were all properly captured, most of them at Jason’s makeshift residence. This film ends in a manner similar to Road to Yesterday (2015) starring and produced by Genevieve Nnaji. If you enjoyed that film then this one must definitely be yours. After a long story ridden with sacrifices and touching romance, a love-note and a windy corridor was all there was to reap. Directed by Emmanuel Akaemeh (Unforseen, Ridiculous Idea), Misconception gets 4/10 for well-matched costumes (by Dumebi Abubakar) and on-point props brought to nothing by an appalling waste of time.

We’re gladly saved the hassles of meeting, nor needing to meet, Jason’s parents. And on another note, sadly, there was no retribution meted to David for catalyzing his ex-girlfriend’s death.

Next Post And the Nominees for the 2017 AMVCAs are…