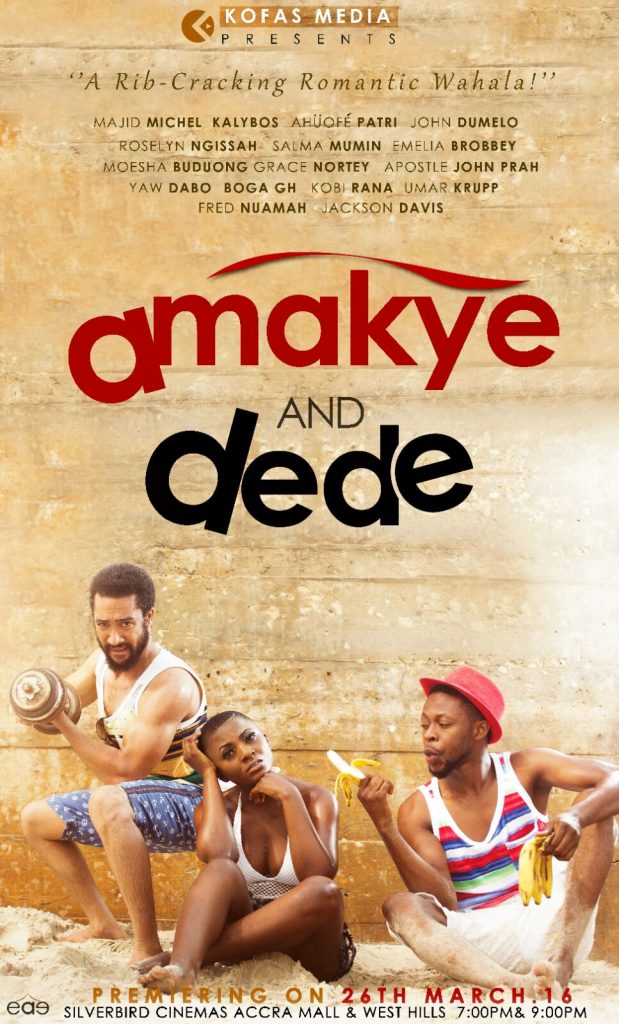 Some days can be tough and hard, due to these days, we sometimes crave a little spark to light up our day and make us laugh. Most times, a film is that obvious element that offers us that spark we deserve. What can Majid Micheal do in a comedy (IMO I would say not much) but he seemed to have proved me wrong.

Amakye & Dede from the stables of Kofas media a Ghanian Production. The romcom  is about two best friends who fall in love with the same girl and the hilarious turn of events they go through.

Now, I am a sucker for romcoms and as i found this one hilarious, I think you should watch this film and here is why.

Majid Michel in the title character:

Majid Michel has always been a comedian, not out rightly but he portrays most of the characters he plays with great humour. From the wonderful Ghanaian film “Four Can Play” and “Somewhere in Africa” where he plays two distinct characters to “Champagne” by Emem Isong. He offers a delightful sense of humour in each film and this time he takes it all the way by being gloriously humorous in Amakye and Dede. He is a wonderful actor with a great range. He is Dede along with his best friend Kalybos (Amakye) they fall in love with the same girl, Emefa (Ahuofe Patricia) this sets the tone for one of the best comedies I’ve seen in 2016.

It’s a Satire with great dialogue

The film revolves around Amakye and Dede trying to win the heart of Emefa. There are a lot of theatrics in this film but I love a film with a good dialogue and I believe that comedy is the best way to tackle the problems in our society. Amakye and Dede tackle the issue of poverty, ambition and love. The writer does a great job of tackling different issues that are great and worth commending. The dialogue is rich and as the main characters Amakye and Dede talk, they say a lot of funny things but they also pass really powerful messages to the audience. That is what makes this film special.

The Chemistry is out of this world

Amakye and Dede are both mechanics that pretend to be what they are not. They fall in love with the same girl on the same day and what happens next is, we have great actors that deliver spectacular performances. From the beginning of Amakye and Dede, the characters offer us spectacular performances. The chemistry between the lead characters makes it the best part of the film. It is natural and spontaneous. The actors understand each other and they are there to complement each other. They will make you laugh. Watch this film on a bad day and see how your day turns gold.

Sound is great and so is Cinematography:

The movie features spectacular settings and the cinematographer strikes a balance between the realistic poor life of Amakye and Dede and the life of riches that they seem to assume to have. The fact that it is a comedy does not give the filmmakers an excuse to rush the project. The execution was well thought of and that is why we enjoyed this film so much.

Previous Post 6 Films that focus on Important Facts in our History and why you should check them out!