That destiny indeed intertwines our paths with others, destiny did intertwine my part with Lycia- Freddie Dan-Ansa.

Dan Ansa, is stricken by throat cancer and as part of his dying wish, he invites his numerous children from far and wide to live in his mansion in Accra, Ghana for seven days. In the house, all sorts of suppressed habits and secrets arise. 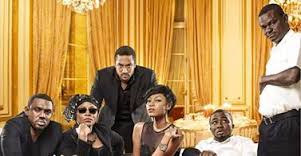 Family Runs, ‘House of Gold’ is the second movie directed by Pascal Amanfo and produced by Yvonne Nelson that we would be reviewing and unlike their previous production “Single and Married,” this production is utterly muddled and cluttered

First off, I believe its quiet daunting when a movie has 6 or more popular cast members, as the script writer has the Herculean task of ensuring that each person plays a vital role in the production. In some cases this works, in others it’s a classic fail.

Majid Michel plays the heir apparent and leader of the pack, Freddie. Majid’s character comes to me as the voice of reason to his siblings lives without looking into his. He is composed, tries his best to lead his flock and delivers to his lines. In some other scenes, it feels like he just stumble into acting and didn’t understand what his director wanted him to achieve.

Yvonne Nelson, who plays Tamara, the self centered, all about me model  was obnoxious as well as annoying. Her long time rift with her sister Nina played by Omawunmi was played out satisfactory and felt like some sibling rivalry we have definitely come across.

I guess I am beginning to comes across as a broken record when i say too many unnecessary scenes, but it seems like the more we say it, the more they filter in.  With Family Runs, there were dozens of unnecessary scenes. From conversations of the house helps, to the arguments of the helps, the list goes on.  What this translates too is a lack of creativity and time consciousness. Production quality was untidy, some dark scenes, translation from French to English was barely legible, shadows and the technical list is endless. This is getting worrisome though especially when the same team pulled off an ok production quality months earlier.

The scene were they started spilling each other’s secrets, was were the comedy basically started and ended in the movie. It kicked off well, with Tony telling on Sam, I didn’t get Sam, that is Ice Prince character’s business in also spilling secrets, but it keep the ball rolling and sprung all the other secrets round the table and this was totally hilarious, it was the only scene that made sense and flowed properly.

Nina as well as Peter aka Peepee were my champions in this movie. The pretend sex scene and Peepee’s gay moves were a good laugh and added humor to the movie that was meant to be a comedy but was slowly drifting to drama.

My WTH moment goes to the scene which introduces Ice prince and the camera pans over his belt, watch and shoes, that seemed totally uncalled for. If the intention was to portray him as extremely rich, then not having a car to get away from a pending situation completely spoils that work.

Family Runs was a miscue in terms of production quality, post production and scripting, which is very unlike the team that put Single and Married together.

Over all, it gets a 3.5 over 10.
No votes yet.
Please wait...
Voting is currently disabled, data maintenance in progress.