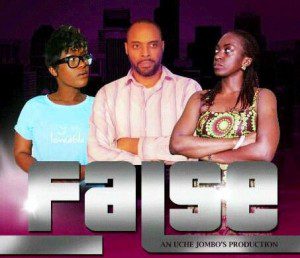 The movie ‘FALSE’ from the joint production studios of Uche Jumbo and Iroko comes one of the simplest movies of Nollywood’s history. FALSE had a cast of mainly 3 people, locations of not more than 6-7 (well it might have been less) sets and a script that was somewhat genius. The movie features the delectable Kate Henshaw (long time no see) as Toyin Ogunjobi, Kalu Ikeagwu as Greg Ogunjobi and of course Uche Jumbo.

Greg Ogunjobi is the loving and devoted husband of Toyin and a randy bugger who has a cyber-phone relationship (for lack of a better word) with Imelda. On the couple’s wedding anniversary, Toyin receives the visitor from HELL!!! The story in terms of cast is a step in the right direction for Nollywood, as they totally eliminated all those unnecessary people we technically don’t need in our movies but have nonetheless. The scenes were kept to its barest minimum with most of the scenes shot in Ogunjobi’s house and what ensures in it, makes the movie a can watch!
Much as I appreciate Uche Jumbo and all her work in the industry, it seems her best roles are when she acts crazy or psychotic, she managed to pull this one off and looked truly  mad with the way she carried herself and her outfits (short and too tight and inevitably brought out all those areas that should be hidden). Kalu has been away for a bit, preferring to be on television and was comedic. His portrayal of a horny man having phone sex and sex was okay although it looked like he had a doll with him and not Kate because the way he threw her up and down was hmmm… The way he screamed (we do need to find a better way to express  our shock sha!!!)  and his obvious confusion at the situation he felt he had under control, was priceless, thumbs up on that. As for Kate, I have been a fan for a while and I loved how she handled herself. I didn’t however get her zombie movement at the end when she was at the hospital and station. Allowing a strange woman into her house erm… not feeling that, but hey maybe (just maybe) it can happen.
The terrible heat that was so evident on everyone’s faces and bodies inside the house, was a complete no no. Not sure how that can be avoided because of noise and sound getting into the microphones but there is a need to find lighting or mics that will withstand the noise. My grouse with this production came right at the end, when I felt they had put in a little measure of hope, I was totally disgusted and I cannot but stress the importance of ADEQUATE research to be carried out before pen is put to paper. So, Imelda the psychotic lady goes gaga and stabs herself and is taken to the hospital. Now the fact that there is more blood on Toyin compared to Greg who was directly in front of Imelda when she stabs herself is just a tip of my annoyance, at the hospital, while questioning is going on, the walks in with a file that contains Imelda’s medical history and finally she tells the detective and Greg that the patient is dead. It is on this premise that the detective decides to arrest Mr. Ogunjobi.
Now, I believe Ike is not a stranger to the industry and to storytelling but please, let us be factual, who accompanies a policeman to the station without any legal counsel present especially if you are well aware of your rights? Secondly, I have never heard and I stand to be corrected, where the only witness present who happens to be the spouse of the alleged statement is not inadmissible to the policeman doing the questioning (excuse me say what???) How!!!
As lovers of popular American Television Law series like Suits, Boston Legal, SVU or any other legal drama, there is what is known as spousal testimonial privilege, where a wife or husband cannot testify against each other but if there is a divorce, that privilege ceases to exist. Now this law applies only in the American Judicial system, with the British, spousal communication is no longer privileged, except in limited circumstances. Not sure what is acceptable legally in Nigeria, but I seriously doubt that a policeman will say a particular person’s statement is inadmissible.
On my final grievance or better still, disgust, I do not get how the doctor can withhold evidence, which was contained in the file she got (from Imelda’s doctor) which was crucial to the investigations only for scenes later; the doctor is shown sharing the information with the patient’s sister and accusing her of knowing her sister was sick and not doing anything about it. Haba nah, we aren’t kids!!! If she was working with the doctor patient confidentiality clause, then she had no right to share that information with the patient’s sister, a coroner’s report should have been prepared and then that can be shared, but I guess that’s asking for too much.
The movie kicked off well, (OMG, did anyone notice the use of a bb to type the opening credits, what was that about?) it was an acceptable script and nice cast, but as mentioned, the continuous lack of attention to detail when writing the scripts and preparing for roles is appalling and hence, it gets an E from me.
No votes yet.
Please wait...
Voting is currently disabled, data maintenance in progress.