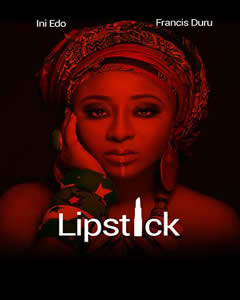 Lucon House brings us Lipstick, a film that takes us into the life of Debby (Thelma Okoduwa Ojiji), a former prostitute, whose hate for Frank (Hoomsuk Alex Jibrin) and a long-ago grudge incites a round of killings.

Best Actress at the 2015 Ghana Movie Awards, Ini Edo (While You Slept) plays Isi Deborah as she sheds a lot of tears in this one. Nnam (Sydney Diala) and his son Nedu (Francis Duru) found her on their way to the farm, by a bush path, unconscious and left for dead. The amount of death and violence in this film – based on a personal grudge or not – was too much. I’m almost certain a sequel to this movie would only be a continuation of its vicious cycle.

The soundtrack (Rai Maiwa’azi) was pleasing, the effects were rightly jarring, but how far is Jos to Abia state? Can it be driven in one night? By car not by plane, because the assailants made that trip in the same clothes on the same night. And how come in a few months, Ini Edo’s bullet-injured arm didn’t sport a scratch? Do bullet wounds heal up that fast? The time period since her rescue was too short to be an excuse for such an obvious flaw.

Bimpe (Besin Abarshi) and brother Efe (Wills West) had to be the most hilarious, pair ever. Bimpe dishes him lots of gossip, but while warning her to desist from spreading false stories, he still keeps asking for more. The lighting and visual quality weren’t impressive at all.

Towards the end of this film, Debby defiantly owns up on all the atrocities she’s committed. She makes these alarming confessions in a police station with cops standing in front of and behind her. Were the cops deaf (logically not abusively) or bribed? The murderer wasn’t confessing via telepathy nor sign language so why didn’t they immediately seize her? Answer: Because they were actors and they knew the storyline.

Makeup (by Jenifa Ojezua) on Ini Edo was okay till the camera showed her fingernails while picking beans. They were polished and well manicured. For someone left for dead, always tying wrapper to and fro the farm (for months), and in a village with no basic amenities, her purple fingernails were impossible. There was nowhere she could have made them.

Written and directed by Lucky Stephen (Visual Effects Artiste – Lucon House), Lipstick was a mesh of violence and mischief laced in lots of pretty screenplay (from a berating Francis Duru) and darn good music.

Next Post 4 Reasons Why Horror Is The Best Genre