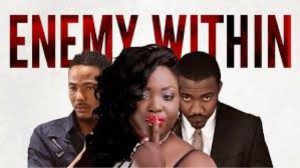 Director– Pascal Amanfo
Cast– Dan Tei Mensah, Roselyn Ngissah,  John Dumelo, Frank Artus, Eddy Watson,
Story– Dan Tei Mensah
Time– 1:44:30
Year– 2014
Forgive me Kelvin, but any one looking at the 2 of you won’t even realize the real story behind it all… Greg
Enemy Within is yet another movie from Ghana’s most popular movie director, Pascal Amanfo. It centers around the lives of various people who have one person in common. That one person they would rather forget.
While I admire the doggedness of the Ghanians in trying to curve a niche for themselves and stand out especially from the shadow of a country like ours, I would say that, most times, their productions make ours look like we are masters of the game.
Dan Tei Mensah who played the lead male character, obviously smitten and in love with his wife, carried the dumb look very well. However, there were instances where it felt like he actually forgot his lines and the post production editor having cut those scenes up so much, felt he should leave some scenes so as to, spice up the movie. His wife played by Roselyn was forgettable, I would love to call her the lead female character, but like most Ghanian movies I watch, the plots get confusing, the characters like Roselyn seem like they are lost in a maze and it ends in a baseless conclusion.
Jack played by Frank, who was the main antagonist was psychotic, I actually felt he was back with a vengeance, back to take what was rightfully his and make sure everyone pays especially since his name was a mere whisper most times, well let me not get your hopes up as he was a wet blanket that just dampened the whole mood of his character. Eddy the con-artist, carried on very well, the schemer and overachiever role, was pretty believable, he was basically the only character who pulled his weight and if not for the other not so great acts, he would have easily been the best actor on the role call.
As it relates to production quality, they were a couple of hits and misses, or maybe more misses than hits, some scenes had interpretations while the actors spoke in English and I wondered!!!  Maybe, this was because the sound quality was low at that point. There was also sweat on everyone, which looked and felt disgusting, but I guess they are yet to get through that production faux pas. We had a brigade of unnecessary scenes probably due to the fact that as I mention Ghanian scripts take effect as the movie goes on, so there’s no point hampering on them.
While Pascal has been a favorite, earlier (that’s when Xplore kicked off) this work falls under the ‘watch at your risk’. What is the real aim of the sex scenes in Ghanian movies, must be some sort of selling point? Cause they end up looking like cheap porn and a total turn off, than an added benefit.
I understand there is a need to compete or churn out movies like Nigerians do, but I believe strongly that if they just concentrate and put their creative minds to their scripts and acting, they would be amazed at how good their productions can turn out to be.
Enemy Within earns a disappointing 2.5/10 from Xplore.
No votes yet.
Please wait...
Voting is currently disabled, data maintenance in progress.

Previous Post The Lion King at the Lyceum Theatre.