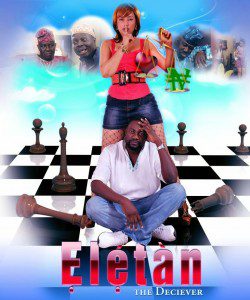 What is reviewing Nigerian movies without once in a while checking out what our local dialects have to offer as well. Although not technically called Nollywood, they however play a major part of Nigerian Movie Industry.

Eletan from the stables of RollTape productions follows the deceitful life of Omolara and the lengths she will go thorough to be rich. Omolara played by Lilian Bach is married to Adisa whom she totally despises but maintains a sizzling romance with her lover of many years Raymond played by Yemi Blaq.

All the characters put in a thing or two into their roles, having been in the game for quiet some time now and been that I am not a frantic Yoruba movie lover and don’t get the language like that, I believe they did an okay job. Although, I was confused by Kike’s story line but I believe the script writer had an ace or two up her sleeves.

I have been a lover and follower of Yemi Blaq’s career for ions and I must say he is totally claim under pressure and even when he looks hurt or depressed, he still manages to look pretty cute though I don’t believe that’s what expected of him all the time in most of his movies, but he does pull it off very well.

As for the producer extraordinaire, Lilian Bach who took on the sole role of writer, producer and main character, her role and acting wasn’t too shabby. She has a way of using her body to gesticulate especially when she was warning another character or being drunk, but I guess that comes with Yoruba movies. I still don’t get how in the name of riches a wife will decide to marry her late husband’s elder brother when she has some hot lover but I guess that’s the supposed lengths a lady will go for wealth.

The film plot was pretty confusing, I believe it was in her bid to keep the suspense through out the movie. There were the occasional unnecessary scenes like the part where she had her friends over and they were driven out by her new husband and some parts that just didn’t add up and was molded up to make the movie end quickly.

As it relates to picture quality, the movie was top notched as it was very clear and some scenes looked like they were shot abroad and that totally blew me away. There were no fond memories, just obnoxious scenes. I am trying to see the role advertising plays in our movie and how our producers can use advertising effectively and creatively cause Onga scrolling under the screen during particular scenes just looks odd biko!!!

For real Yoruba movie fanatics, I guess this movie might not cut it on your top 5 Yoruba flicks, but it was pretty decent to me and on behalf of Xplore, this movie gets a 4/10.

Next Post ‘The Hobbit: Desolation of Smaug’ Tops $500 Million Worldwide