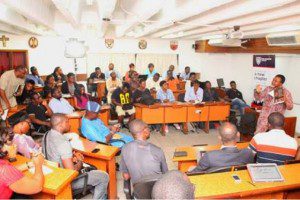 Nigerian filmmaking should not be reduced to a mere copying of foreign styles of shooting and editing. Rather, keeping in mind the cultural aspect of films, the Nigerian filmmaker should be able to produce films that are not only technically well-made but also reflect the cultural milieu in which they were made. These ideas were put forward by Mr. Mahmood Ali-Balogun, the producer/director of Tango With Me, while speaking as the guest at the February 2014 edition of the Filmmakers’ Forum of the GTBank Nollywood Studies Centre. Mr. Ali-Balogun, who spoke on the topic, “Enhancing the Cinematic and Production Values in our Movies,” stressed the importance for the filmmaker of being able to do something that works for his/her people. But, he noted, there is a need to know the rules before attempting to bend them to suit one’s purpose.
Mr. Ali-Balogun went on to list what he termed “the fundamentals” that a good film should have. These fundamentals consist of a combination of quality technical materials and methods that are used in production. Speaking about the script, which was mentioned as the first critical requirement for a production, he noted that it was not enough to have a good story. The story must also be believable with appropriate casting and location.

Still speaking about the script, he emphasised the importance of the script supervisor’s role. The script supervisor is responsible, above all, for monitoring and ensuring adherence to the script. Unfortunately, he noted, this role is largely neglected in the Nigerian film industry, and the consequent glitches are obvious in many films. The script supervisor works closely with the director and the editor, and the presence of such a person on set helps to prevent many mistakes.
Mr. Ali-Balogun showed the audience clips from his film, Tango With Me, which he used to illustrate some of the points he was making. He did not hesitate to draw attention to what he identified as flaws in the film. These were used as learning points from which members of the audience benefitted.
The Tango With Me producer also spoke about the importance of cinematographic values as a prerequisite for getting one’s film accepted for exhibition in the cinema. For a film to be accepted in the cinema, he said, it must possess four key values: it must be interesting; it must be profound; it must be sublime; and it must possess visual appeal. Films that lack these qualities are hardly likely to be accepted by cinema owners.
The Filmmakers’ Forum, which ended with a cocktail, was attended by a large audience that included Mr. C.Y. Okonkwo, the veteran documentary film producer. The next edition of the Forum will take place on Thursday, the 20th of March, 2014.
No votes yet.
Please wait...
Voting is currently disabled, data maintenance in progress.