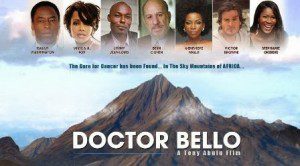 Movie Synopsis
Brilliant Cancer specialist Dr. Michael Durant is emotionally troubled, wrestling with the traumatic loss of his 10 year old daughter from Cancer. Immersing himself in his work at the hospital, away from his wife who blames him for their child’s death, he forms an unlikely bond with a sick seven year old boy Sam.  As Sam’s health deteriorates, a secretive Nigerian Nurse convinces him to seek the help of Dr. Bello, an uncertified Nigerian Doctor, known in the Brooklyn-African underground as a miracle worker.
Set in three major locations; downtown New York, Lagos, Abeokuta and Ondo, this HollyNolly (a combination of Hollywood and Nollywood stars in a movie, don’t ask where it came from) stars Isaiah Washington (Grey’s Anatomy, New Jack City) as Dr. Durant, while his wife Chloe is played by Vivica Fox (Kill Bill 2, Two Can Play).
While in New York, I cannot say I was pleased or sold on the acting, scenes or directing. Coming from the medical background of Grey’s Anatomy, Isaiah does a fantastic job of being a doctor. His use of the terms and their terminology are flawless, while carrying himself like the doctor he is and one that has the weight of the world on his shoulders. His wife Vivica was also sold on her role, playing an emotional distraught woman needing her husband now more than ever.
Dr. Bello on the other hand played by Jimmy, wasn’t all that. Jimmy rarely does any talking and when he does, I cannot say he was coherent. He does a horrible job of playing a Nigerian (didn’t like him in Phat Girls too)and for one that has lived for a while in the States was a big Hell No (one word, acting coach). Other cast members were okay, I must hand it to Evan Brinkman who played Sam, with layers of makeup which gave him the cancer stricken look, he appeared pretty ill; he did a fantastic job of playing sick, passing out and convulsing.
What I obviously didn’t get and made me sigh was the silence that surrounded the scenes and the city of New York (how is that possible, the city that never sleeps and is notable for its loud and distinct noise, these sounds we obviously hear when we watch movies such as Date Night, Salt, Tower Heist and Side Effects is all of a sudden quiet) coupled with the sweat that was evident on characters like Vivica and Isaiah’s faces. I guess we had a little bit of Naija in the states.
Due to his unorthodox means, Dr. Bello is arrested, Dr. Durant and the nurse are suspended and life kind of takes a nose dive for them. When he learns of Bello’s illness, Durant decides to make it his personal mission to find his cure.
Enter Lagos, things automatically come back to earth and become rowdy and crowded as ever. There is the MTN sign flashing everywhere and the talk of getting an MTN line as they are the major sponsors (OMG), our Nigerian characters come into play, with the unnecessary conversations, unnecessary scenes and the uneasy quest to find the cure for (what was it again???)
Durant meets with friends of Bello who lead him from pillar to post to find former lecturers or associates to find this plant, flower, tree whatever it is to cure Bello. To my mind, they could have done without the barrage of scenes and its characters as it was a total waste and a merry-go-round for me. Another unnecessary and totally irrelevant scene was the part where Lara tells her daughter that Bello was her dad (smh com’on Tony, you are a seasoned writer, director and producer! What does that add to the plot???) Durant gets to the town of Olumo and meets up Dr. Olumide played by Tony Abulu and he tells him of another place where he should visit before he gets to his final destination (at this point, am getting dizzy). Enters Genevieve, the new assistant of Dr. Olumide and love interest to Durant meant to lead him to his final destination. Did anyone get the importance of the accident and police scene or taking Durant to her mum (totally unnecessary) who tells him to take him to her uncle (*sigh* dear Lord). From here, I lose interest, only to come back and see there is a ritual for him to go up the rock. He gets there and alias… Dr. Bello and Durant’s daughter are heading towards the light, but not after a couple of words, at this point, I have had enough!!!
I believe, Doctor Bello was just mind-numbing. There was nothing that stood it out from other Nigerian movies that we shoot either in Lagos or in America. It was amazing how Tony kept it somewhat simple while in the States, but once he crosses over to Nigeria; he decides that everything that is anything should be in the movie! Which includes actors, scenes and all what not? The movie also begs the question, what good does having a Hollywood actor (not sure if Isaiah qualifies, maybe Vivica) bring to your production???
I refuse to give this movie a grade, I pass it on to you guys who have watch Doctor Bello, on a scale of 1-10, what would you rate it?
No votes yet.
Please wait...
Voting is currently disabled, data maintenance in progress.