The story of infidelity and a man’s obsession for his mistress threatens to break a young couple’s new union. 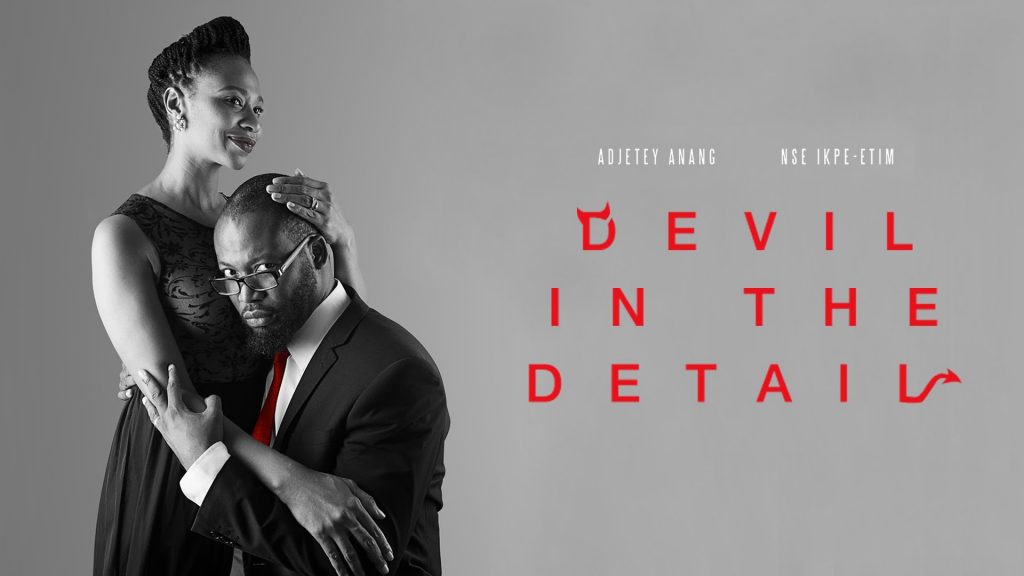 Ben Ofori (Adjetey Anang) and Helen Ofori (Nse Ikpe-Etim) are a married couple. They appear very happy at first but as we progress, suspicions arise. Helen receives late phone calls, a bouquet of flowers, she lies to him at a point, but it is all a cover up to surprise him with a birthday party but before he realizes this, he cheats with Claudia (Ama Ampofor) who is his personal assistant. Claudia had her eyes set on him from the onset. For him, it was a quick fling but she is obsessed and ready to take it further, she makes it an effort to make him uncomfortable in front of his wife while they celebrate his birthday. Eventually, he gets engrossed in this affair. He cannot ignore his mistress and Claudia is desperate to keep him, ignoring that he has a wife.

There are a lot of twists in ‘The Devil in The Detail’. First of all, we see an obsessed mistress and eventually a man who instead of showing love to his wife, has an obsession with his mistress. His wife gets pregnant but he is unable to give her the concentration she needs and when the symptoms of her pregnancy begins to affect her, he thinks that his mistress poisoned his wife and so we see physical abuse. He strangles and beats his mistress but when he finds out that his wife is indeed pregnant, he does not focus on helping her through the early stage of the pregnancy, he instead, returns to his mistress.

We can always trust Shirley Frimpong Manso to offer us incredible stories. She has a focus- it is love, family, and betrayal and though she focuses on these things, there is a difference in the way she presents each story and that is what makes her films spectacular. She leaves her viewer to make a decision on what happens in the final scene of the Devil in The Detail. We are not going to get a sequel but we can decide what happens next. The ending is not too smooth but in a nice way. The story at the end of the day is good but not Shirley’s best offering. The film focuses more on the sexual activities of Ben and Claudia. At the end of it all, we see that they are both unfaithful but what lesson can we draw from The Devil in The Detail. We can hardly answer this question.

Acting was great from the whole cast. Shirley knows how to manage few characters in her films. That is another characteristic that makes her films special. It is either two actors like she does in Rebecca or four actors like in Love or Something Like that or as it is in The Devil in the Detail she offers us eight people and they do well. Nse is spectacular and Ama Ampofo plays her role really well. Adjetey Anang is also incredible.

The other technical elements are just commendable. I am yet to see a film by Shirley with bad sound or an unexciting cinematography style, thanks to her collaboration with Ken Attoh. They make beautiful visuals.

Have you seen this movie? Tell us what you think in the comments section.

Next Post Short Films Are Easy To Watch; They Are on YouTube! Check Out The Best Shorts We Have Seen