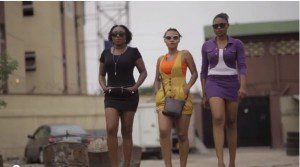 Just when I thought it was going to be another Nollywood movie with a ridiculous title, DESPERATE HOUSE GIRLS hits a home run with me. The movie follows the lives of Ekemini, Victoria and Ivie played by Ini Edo, Tamara Eteimo and Mary Lazarus in the city of Lagos trying to eek out a living for themselves.

After a run in with a former classmate who disses and embarrasses them, they make a vow that they must become rich by all means (same ol’ same ol right?) they decide to be house girls for people living in the suburbs of Lagos. Ekemini decides to have her way with her Oga, Victoria decides to steal while Ivie, has no clue what she set out to do.  Like they  say, the rest is history, but this history was a mix of joy and laughter for me.

Uduak Isong Oguamanam is no rookie in the profession she has produced and written a number of films, but this one definitely takes my cake. The choice of cast members was a thumbs up for me, I particularly like the performances of Tamara Eteimo and Mary Lazarus (the royal arts academy aren’t taking no prisoners) not forgetting Kenneth Okorie young fresh faces that the industry needs. But what am I on about, what’s a production without a director? Mr. Elliot deserves every kudos for this movie, it isn’t his first I have watched, but I was indeed impressed. The acting from the characters where believable, the scenes and shots where on point (some unnecessary scenes still but nothing that can’t be forgiven).

After all said, I totally enjoyed the movie (we need to start learning to be more creative and adventurous with names), it was believable, I could totally relate with the characters and even though some romance scenes looked sloppy, they were totally okay.

I dove my hat to the production team and this movies gets a B from me for directing, production and casting.