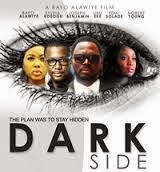 DarkSIDE is a story of betrayal, greed and desperation. Bankole Daniels is a self acclaimed billionaire, who doesn’t really care about the people around him. After a run-in with a blind man who has premonition tendencies, his life takes a turn for the better. Bayo Alawiye, plays Bankole Daniels a hard boss that elicits more fear from his staff than loyalty. He works hard and doesn’t have enough time for his wife or notices her craving for a life without him. He looses his sight in an unforeseen accident and the true nature of his wife and that of his friend comes to bare.
Bayo’s performance as a hard worker, horrid boss and distant husband is weak and in dire need of training, an acting coach or better still a performance enhancer. He lacks the grooming as well as composure that comes with being a rich billionaire businessman. As far as being blind is concerned, it was quiet easy for Bayo to adapt to being blind, I’m not asking for the whole process he went through when he became blind but for someone who grew up with his sight, it was so easy for him to adapt to not seeing at all and his excitement on being able to see was so overwhelming that I actually missed it.
Deola played by Sylvia Udeogu, was the butt of all the jokes cracked while watching the movie. She seemed more anxious to make out with Kayode played by Joseph Benjamin than give us a performance to write about. Easily coerced and determined to see the end of her husband made her predictable. What I didn’t predict though was her grammar, there were obvious sentences that even in reading, it just won’t sit right in one’s head, but hey! I thought to blame it on her roles in Yoruba films, but she isn’t a Yoruba actress,  so maybe the blame goes to the script writer, right?
As for Kayode, Deola’s lover and Bankole’s friend played by Joseph Benjamin  as well as Sheila played by Uru Eke, they both performed averagely. Joseph’s roles have become mundane and monotonous, I believe he can play a two-timing lover in his sleep. He gave nothing to his character except his foolishness and bowing to the every whim of being a lover to his friend’s wife. Uru on the other hand maintained her composure and did as she was instructed. She seemed all put together and manipulative that it became clear fast that she was pulled in to be a distraction in the plot of the production. 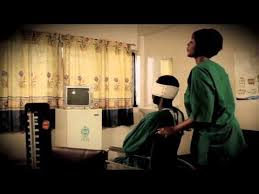 On his second role, which is the directorial one, Bayo wasn’t too shabby. From findings, Bayo is the director behind popular hit TV franchise ‘Who Wants To Be A Millionaire’ and a few other reality series. Although, it’s one thing to direct a reality series and another one to direct a feature film. I give kudos to him for the use of those  tiny cameras used in car scenes. We saw all actors in the vehicle at once as against the camera man having the Herculean task of ensuring all characters are in one shot. There was no other outstanding camera angles or those shots that wowed one, picture and sound quality was top notch. We do believe that, there is promise in Mr. Alawiye’s sojourn and we trust it will only get better. As it relates to the script, I must commend Tijani Balogun, there was a hint of suspense that made one stay on to watch till the very last scene, however, with all plans or in this case script, there is need for powerful execution/acting to make it stand out.
The movie title DarkSIDE, gave this suspense-thriller feeling (Star Wars fans say yay)  like some character would head towards a bad bend, fall off a very high cliff or just hit a horrid strick like Keanu Reeves in the 1997 movie, Devil’s Advocate. While nothing of the sort happened in this production, Xplore gives the movie 5/10.

Have you seen the movie DarkSIDE, tell me what you think about it.