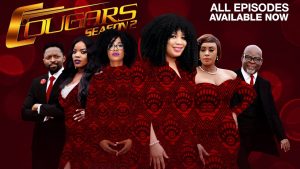 Nse Ikpe-Etim is teased as a major cast in the third season of Cougars but she rarely appears and when she appears, it is to be saucy, which is an incredible addition to the story, only that her appearance in the series is a marketing ploy to gather more viewers, and when the series succeeds in gathering these viewers, it has very little to offer. The third season of Cougars is highly predictable and it leaves one with very little entertainment.

The first shot of the series features Lagos, the city where everything happens. Halima (Empress Njamah) is our guide as a voice over. The blogger narrates the pros and cons of the city. She has had her fair share of challenge as a blogger trying to make it happen but she ends up broke. Mira (Theodora Nenu Anago) is in a relationship with her daughter’s boyfriend, she even gets pregnant for him, before she aborts it. Mercedes (Monalisa Chinda) is unable to get along with her younger sister and we start to see a relationship brew between her and her brother in-law, who is the subject of torment from Porsche (Nse Ikpe-Etim)

“Cougars” concentrates on showing older women in relationship with younger men but it fails at giving any other substantial theme. Romance is the heart of matter, yet there is no sizzling chemistry between the lead characters. The writers go overboard to create a romance between a man and his ex-girlfriends mother and when the older lady gets pregnant, she goes for an abortion, allowing her boyfriend and her daughter to re-unite. The writers create interesting twists and interesting dialogues, but “Cougars” is slow. The most sustaining segment of the story is of Empress Njamah as Halima. Halima finds love with a younger guy that saves her from hoodlums, and as a blogger, they discuss her job, it is also interesting to watch her struggling to make ends meet. The disadvantage of featuring such a romance is that Empress lacks chemistry with the man she is paired with.

Aside from the slow story, Cougars 3, hires a supporting cast that is not too impressive in their roles. While Ozzy Agu, Nse, Monalisa, Empress Njamah and Kunle Remi do a great job. The others are slow. Nse Ikpe Etim sustains us with the few minutes she appears on screen, but the series needs more than good actors, it needs a story that is reasonable and sustaining. Empress Njamah is impressive, and so is Monalisa Chinda who throughout the series, deals with a rivalry with her younger sister.

Cougars hardly carries us through the first episode, instead of being a highly sustaining series; it suffers from the lack of proper development. It wants to sell romance to the viewer but it falls short. We have seen stories that feature women in relationships with younger men, some of these stories are usually highly intriguing because of the culture of shame that exists in Nigeria; the type of culture that shames a woman when she starts a relationship with a man that is younger than she is. This culture can be used to create so much drama. Cougars ignore this.

Cougars could have easily been an obsession. It has some of the right cast. It fails because even though it has interesting dialogue, the story in generally slow and with no definite purpose.

The third season Cougars earns a 4/10