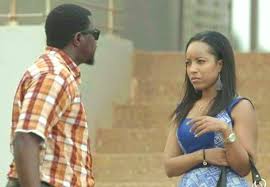 Writer- Leila Djansi
Cast- John Dumelo, Joselyn Dumas  and Jon Germaine
Time- 1:54:45
Year- 2014
Genre- Drama
While running a google search on this movie, nothing springs up except a movie title Northern Affair. Now this movie has the same cast, synopsis and all it is just a name change from Northern to Complicated. While the latter is produced by Mabel Germain with the support of iROKOtv and iFactory Live, this one is produced by someone else. Now I don’t know what went wrong, but hey, I will save it for a story for another day.
Synopsis: A Complicated Affair is about Esaba Jomo (Joselyn Dumas), a nurse who is sent to a remote village to assist Dr. Manuel Quagraine (John Dumelo) in providing health care to the villagers. Initially, he is unimpressed to see that she is a very attractive woman who does not fit into his idea of a nurse. Esaba and Dr. Manuel are forced to spend more time together due to the nature of their work, sparking an attraction that neither of them can resist. They both, however, harbor secrets from their past that threatens their love.
I have seen a couple of movies from John Dumelo and they haven’t rubbed me the right way. However his first reaction to his co-star Joselyn Dumas coming to working with him as a nurse in a remote village was one I not only haven’t seen in a while, but I haven’t felt that level of disgust. It was so evident; I literally had to mumble what’s his own sef. John as Dr. Manuel held his own and let his words, facial expressions and mannerism do all the talking, that it was stunning to see his dexterity. Slow yet steadily, I might change my mind about him.
For Joselyn Dumas who played Esaba, even though I felt her costumes could have been better and a little more down to earth, that is more trousers than dresses, I loved her straight face expressions. She was there to do a job and she was not going to let anyone change that. Joselyn had a cool demure when you would have expected an uproar, being cool under pressure and exploding at the right time felt good to watch and pretty natural. Both characters seem to have a chemistry that didn’t feel awkward, so the love making scene was well done and didn’t have that awkward look like it was been forced.
Written and directed by Leila Djansi, Complicated Affair had a simple script with a good cast that made it come alive. It seemed to go on and on for a bit, so I was relieved when it ended. I expected a sordid secret or at least something with more depth than the synopsis gave out, but it can only get better. Production quality felt crisp, a glitch here and there with sound but props needed more work except if we are claiming poor village and thus no money for the main equipment, then we can let that slide.
Complicated Affair was released in 2014, not sure how I missed it (probably due to its naming mix-up) but it felt absolutely familiar with different delivery from the main cast. It earns a 4.5/10 from Xplore.
Have you seen “Complicated Affair”? Let me know what you think in the comments section.
No votes yet.
Please wait...
Voting is currently disabled, data maintenance in progress.