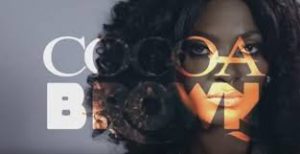 We meet Cocoa Brown, a beautiful radio personality, she is about to round up a show on radio but she takes a break to take us to where the struggle started as a seventeen year old in a relationship with an older misogynistic man.

She is also in a relationship with a married man, she finds out after a romp session, while trying to put his clothes together, his wedding ring falls out. In a boutique she watches as he kisses his wife goodbye before leaving for work. When his wife Asentua walks into the boutique, she is ecstatic to find Cocoa Brown there. Sounds familiar? Cocoa decides to tell Asentua of her husband’s infidelity, but Asentua will rather remain in the marriage than confront him. As time passes, he is unable to get over Cocoa and so when he returns to her with the claim that he has dumped his wife, Cocoa accepts him and they get back in a relationship.

While Mary Jane is outspoken and out-going, Cocoa is a nerd, she is very beautiful, and stylish, but she is also withdrawn. We watch Cocoa from when her ambition started as a seventeen year old to the older, well respected woman she becomes. The beauty of the series “Cocoa Brown” is that it takes inspiration from Cocoa’s work life as well as it does her personal life. Work does not overshadow personal life; neither does personal life overshadow work. It is done in equal proportion and it is a journey to show us how the strong and influential media personality Cocoa Brown came to be.

The secret to creating a different show from Being Mary Jane is how Africanized Cocoa Brown is. A lot of African elements come to play in the series. At seventeen, in a small community, Cocoa Brown’s first boyfriend and his sister cannot bear to think of a woman with bigger ambition than wanting to be a teacher. Cocoa wants to be famous and rich, but to them, it is not allowed for a woman to aspire to all of these things. He breaks up with her. Cocoa is bold enough not to let her ambition win over a man that cannot support these ambitions. We also meet her prayerful aunty that provides good humor to the series.

The series introduces several new characters and the only regular face is Cocoa. Cocoa Brown is an enjoyable series offering inspiration as well as heartbreak. We follow the life of a successful African woman who unfortunately needs a few things to crown her happiness.

The series is well shot with impressive costuming and exceptional shots making up the beauty of Accra. The lead actress Priscilla Opoku Agyeman is not impressive in the first episode but as we progress, we appreciate her calm approach to the role she is playing. She handles the role with a difference and we absolutely adore her as Cocoa.

You should catch Cocoa Brown, similarities exist with Being Mary Jane but it does not stop the show from being its own highly intriguing series.

We definitely recommend Cocoa Brown as it earns an 8/10

Next Post Movie Review: ‘Frost Bite’- Are Broke Guys the Most Romantic?