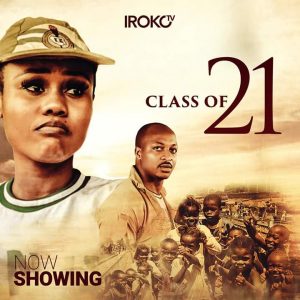 The NYSC year is seen as a year of experience. If you talk to 80% of Nigerian Youth Corp Members they will probably tell you, they do not see its value, and yet the remaining 20% will sing its praises because one way or the other, it has changed their lives by offering them varying experiences. There are also Corp members that chose not to serve as soon as they see where they are posted to.

In “Class of 21” the NYSC serves as an inspiration. We see different categories of Corp members. We meet a young, wild and promiscuous Prisca (Tamara Eteimo) the film starts with her smoking a cigarette with a friend. Her father walks into the situation and she is not remorseful, angrily he cancels her trip for a graduate certificate in the United States and because of his influence; he asks that his daughter be posted to a village for her service year.

She is sent to a village in Enugu, and is rude to everyone. Her bad manners and lack of tolerance makes other Corp members withdraw from her.  Paul (IK Ogbonna) and Musa (Degri Emmanuel) are also posted to the same school as Prisca, they try to be friends, but Prisca is not ready for this. While they commit to influencing lives in the community, Prisca commits to nagging, but as it is, the day comes when she gets tired of living in solitude.  The death of a student teaches her kind manners. This death shocks her and her attitude towards the people is adjusted.

“Class of 21” is interesting because apart from featuring a promiscuous girl that needed a change of attitude, it also focuses on the challenges faced by students in the rural area. When we meet these students they are unable to speak properly. They have no idea what a sanitary pad is and their parents forbid sex education even though it is an important education for every teenager. Some of the children suffer as a result of domestic violence.

“Class of 21” is a strong social message, and it is well written. In its seriousness, Musa’s character offers us great entertainment. When the writer gets too serious, she remembers Musa, and uses his sense of humor to cool our tension.

For the actors, Degri Emmanuel is the most impressive as Musa, he is the Corp Member who sees the service year as an escape from forced marriage. Tamara Eteimo offers a good performance too. IK Ogbonna relieves himself of stereotypical roles, and he does quite a good job on this one. There are a lot of mediocre supporting actors in Class of 21 but the story does service to the essence of the film and so we can focus on the good performance from the film lead actors.