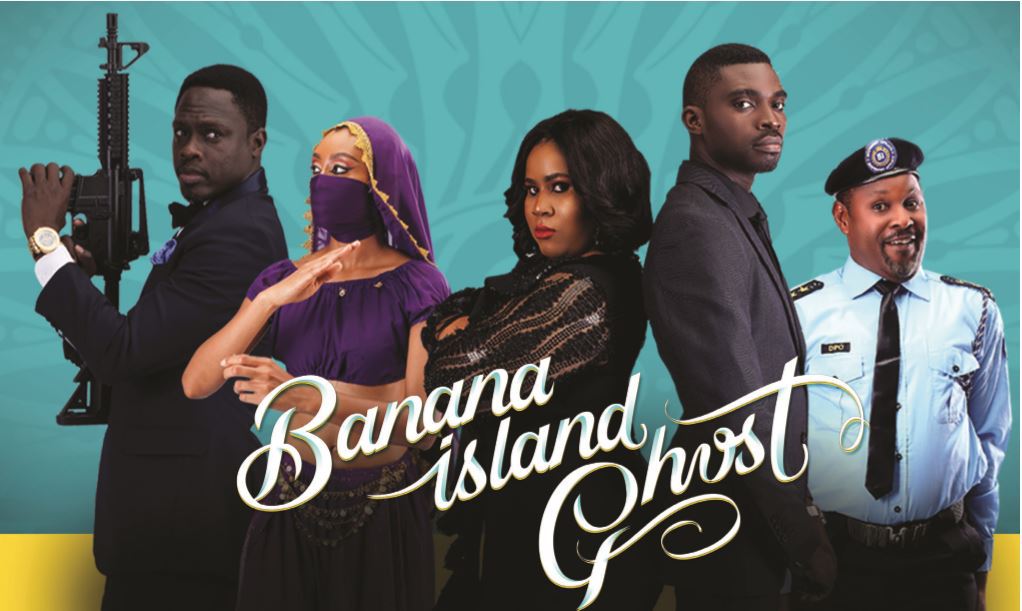 Banana Island Ghost, like the trailer promised, is a mix of theatrical comedy and beat-matching action moves. Nothing was spared to deliver the most stunning pictures and luxuriant aerial views I’ve seen in a while. Written and directed by Bodunrin Sasore (Gidi Up), the film introduces us to Patrick (Patrick Diabuah), a young man whose need for love surpasses his hurry to make heaven. His mother (Uche Jombo) had passed on right after she’d assured his younger self of one day finding true love. After an unrecorded number of years, we arrive at his death, and a camera view staring directly down at his ruined car.

Almost immediately he meets a man (Bimbo Manuel) dressed in white who gives his name by pointing upwards. Patrick assumes, concludes and further addresses him as God. But Patrick wasn’t ready to leave without finding his soulmate, so he’s given three days to make Ijeoma (Chioma ‘Chigul’ Omeruah) fall in love with him before he’s heaven-bound. Ijeoma on the other hand is equally given three days by the bank to come up with 18 million naira or forfeit her Banana Island inheritance to Mr King (Ali Nuhu) – the Ninja-guarded casino mogul.

Side attractions like Tomiwa Edun (as Ijeoma’s boyfriend), his alleged cousin, and Damilola Adegbite (Flower Girl), were welcome, especially with the wild performance and a drug-overdose. The part with Linda Ejiorfor (the award winning actress for A Soldier’s Story) and her co-bullying bestie could have been safely left out of the script. How did the road accident they caused Ijeoma be so shoddy-handed? No bruises, nothing. Akah Nnani (Shade Corner, Akah Bants) played a junior officer who paired with Saheed Balogun (as a Divisional Police Officer) for the most hilarious scenes. It’s hard to believe he plays a serious-faced music manager in Industreet. I expect he’d get an AMVCA award for this. He had an easy vibe that worked for me.

Saheed Balogun (Lagos Vibes) takes a high five for his comical DPO profile. He had a load of lines though a few of them were exaggerated. His use of the indigenous Yoruba language satisfied me on many levels. His scene with Akah Nnani stretching forth his palms for a blessing turned upside down shouldn’t be missed. Don’t blink when the director is shooting scenes in the DPO’s office or you’d be waiting to catch it next time at a film festival, on EbonyLife or Iroko TV.

Patrick Diabuah (93 Days) played the ghost and his comedy was pardonable. His fighting scenes however, combined with the camera angles (by Ola Cardoso), were ear-pounding action with all the right slow motions. The same goes for the Indian Ninja bodyguard who had something of a story in common with Zainab Balogun who played Wonu in The Wedding Party. Also, did Mr King’s security cameras show the Banana Island ghost on his CCTV? Sadly it did. And after the DPO went after Mr King we do not see what went down. Was he apprehended or did he get away?

Produced by Omorinsojo Spaine, Banana Island Ghost is the first film with Chioma Omeruah (Road to Yesterday) and Patrick Diabuah leading the cast. Locations and costumes (by Aisha Kassim and Dipo Adeusi) were good over and over with no oversights.

With stunning visuals and a story-line far from boring, the movie earns a 7/10.