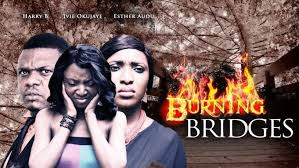 I had one thing on my mind when I picked up a copy of Burning Bridges, Ivie Okujaye! I had this urge to see her in something different, and while I would love to see her own movie, I felt this might just do the trick.
Burning Bridges is about a couple Rose (Okujaye) and Louis (Erics) who have known each other for a short time, they have grown very fond of one another, are in love and plan to marry. There’s just one hiccup: Louis’s best friend is a woman, Terry (Audu).
As it relates to characters, the only memorable person in the production was Ivie. You might read this and think, well that’s not objective, but she was the only one that brought something to her character. That naivety and trust one cannot pull from anywhere. That convincing and totally in love and wanting against all odds to do the right thing with her soon to be husband and his best friend, while not novel, was put together nicely by Ivie.
For the best friends, truth is that with must best friends asides been highly attracted to each other, 9 out of 10 times these people have slept with each other. So when the duo of Lewis and Terry came together that chemistry was barely there, a cat and mouse had better chemistry than them. For Lewis, I wondered out loud, where did he come from? He couldn’t articulate himself properly, his move from one accent to another was appalling and I would love to blame his incorrect use of tenses to the script writer, but he wasn’t the only one that read this script so what went wrong? Terry on the other hand, was just there, nothing special about her role, she did burt into Lewis relationship with Rose a lot, but it wasn’t the intrusive offense type that I was confused at Rose’s lack of trust for them. For Tanya, the friend from America, acting classes will go a long way.
Cinematography and light for this production was okay. As it relates to directing nothing special or out of the ordinary. My grouse will be with the editor though, as they took their sweet time to get to the crux of the matter. With costumes, they either didn’t blend or didn’t fit most of the acts, Lewis in suits to be precise.
Beth Rogers script and what she was planning to achieve can mainly be describe by her, as I mentioned earlier it was a long movie.  Less they say is more, especially in movies and since an individual has an attention span of 5minutes if a story cannot grab our attention in 30,  you have lost half of the audience. So, you literally don’t have the time to touch all aspects or each characters story,
Burning Bridges was definitely missing the essentials in characterization, grammar, and editing and as such, it earns 3/10 from Xplore.
Have you seen “Burning Bridges”? Tell me what you think in the comments section.
No votes yet.
Please wait...
Voting is currently disabled, data maintenance in progress.