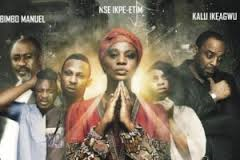 It’s obvious you are still an unrepentant devil, and you, you sit there pretending like you know nothing about all this, meanwhile I’m very sure this is your entire plan- Samuel Otega.

Centered around the ills of child abandonment, Samuel Otega is abandoned by his mother and has taken solace in a life of crime. He narrowly misses the long arm of the law when he is told he has a younger sister as well as mother.

Seeing Sydney Diala who played Samuel Otega, in this role for the first time, was refreshing. He was totally apt, relentless in pointing out the ills of his parents at any chance he got and the effort he mustered in not being forgiving was somewhat classic.

Also in this movie was the energetic Nse Ikpe- Etim who played the role of the mother to the 3 abandoned children. While Nse is a great actresses, her roles of a weeping, sobbing and the wailing woman is getting pretty old. It was totally appropriate for this role, but it is beginning to beg the question, can she handle other roles, the need to be more versatile and also commit to roles that don’t make her look weak and vulnerable will be utterly welcomed.

Some things didn’t add up and although, it can be over looked, I prefer to be thorough, however, I stand to be corrected by the script writer or anyone. Nse falls in love and gets married at 14, spent 5 years with her husband, had 3 children am guessing in succession, 16years had passed before she saw her husband again, that means she’s 35 right? That sounds pretty logical as she could have started given birth at 15. But when the orphanage mentioned that her first son whom she abandoned in the refuse dump died 25 years ago, I had to redo my calculation again. She obviously didn’t give birth at 10, so that technically leaves her at 44. She had no enhancement or added features to make her look that age as she didn’t look a day older than 35.

Kalu who played Nse’s first husband Gabriel Otega delivered to his role and his lines, same can be said about Bimbo Manuel, who displayed extreme patience in this kind of situation and was really understanding especially at the detriment of loosing his family or his older daughter.

Broken was put together nicely, the stunt scene where Sam got hit by a car, was one I didn’t expect. Director, script writer and producer Bright did a good job. I haven’t heard or seen any of his movies, so I was pleasantly surprise. The script was captivating and spoke to a situation which is rampant in our parts. Camera angles where spot on, quick and precise movement to the scenes.

I can’t end however, without stating my WTH moment that nearly spoilt the work put into the production was “the hanging scene”. So as not to ruin the movie, grab your copy and tell me what you think in the comments section.