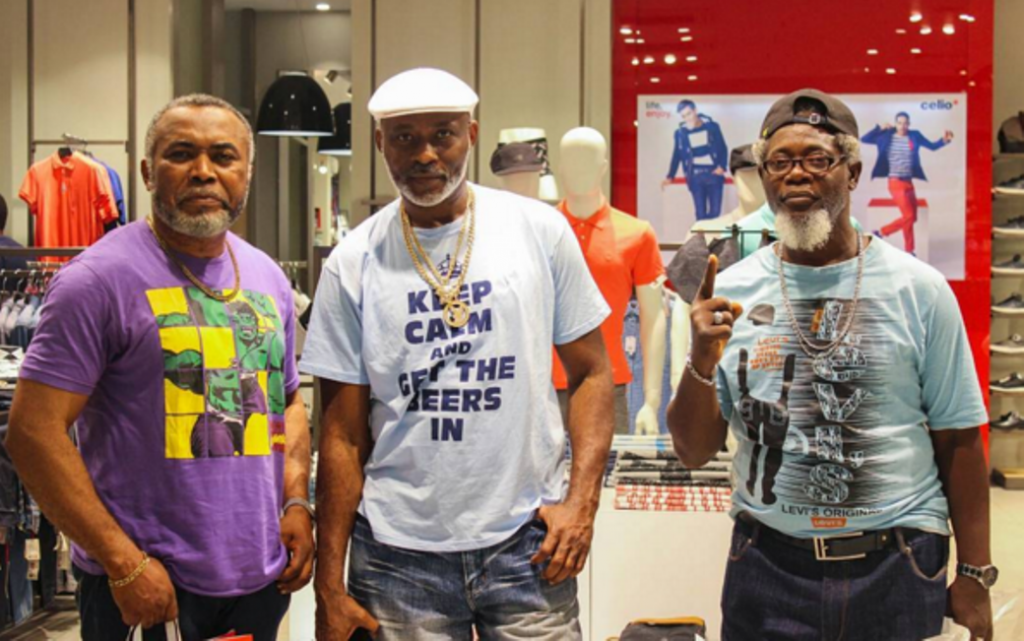 Opa Williams’s ‘3 Wise Men staring RMD as (Irikefe), Victor Olaotan as (Tobore) and Zack Orji as (Timi) is a hilarious, piece of work that shadows the life of 3 friends, retired and waiting their gratuity payments. Irikefe is a serial divorcee/Manchelor (3 past marriages), Timi is a married but available man with a fire brand demon casting wife (played by Tina Mba), and Tobore is the most serious of the three, always seen sporting a suit and married to a slightly ill wife who he loves and still calls his sunshine after 40 years of marriage.

On getting their gratuity payments (35 Million each), Irikefe goes on a spending spree, (changes his jalopy Mercedes to a snazzier one, buys new electronics), introduces Tobore and Timi to hot girls, Instagram and everything on fleek”. They continue to literally live the life until Timi is crossed by Uche, his love interest, Irikefe is pursued by his dubious children for their share of his money and Tobore’s wife lands in the hospital where an experience changes their lives forever.

RMD never fails to amaze everyone with his art throughout the movie, he kept everyone laughing with hilarious lines; his delivery in pidgin throughout the movie showed him to be a real Warri guy’. Although Victor Olaotan struggled a little with his own pidgin delivery, Zack Orji showed he was a veteran with his. This must have been a challenging role for all them as it definitely took them out of their comfort zones. The writers of this movie should be given some comedic award; the lines were consistent, fluid, easily relatable to everyone and most importantly funny.

For me, as I watched, I told a friend that I was afraid that the movie would climax badly being that it had raised the bar from the beginning, all with RMD snapping himself with his nicely cooked noodles, to Timi’s wife praying down heaven and shadowing him as he attempted to take a love call from Uche in the middle of the night and Tobore’s sudden change of wardrobe from suits to sagging jeans and I dare say, I was right. For some it ended just right but I feel it could have ended better.

For those who know Patience Oghre, they swear she’s a fantastic director, also a veteran in her right and they are right. This movie for me was the most hilarious Nigerian movie of the year 2016; move over AY’s Trip to Jamaica, you have a new contender. It starts showing at the cinemas this Friday 9 December.

Over 10, because of the way it ended, I would give it an 8/10 otherwise, it would easily score a 9. Although the movie is largely a comedy, Opa Williams hints that it’s a gospel movie and it is a start of a series of evangelic movies he intends to roll out in the near future, we can only wait.

Previous Post All the Faces at the 2017 AMVCA Nominees Annoucement