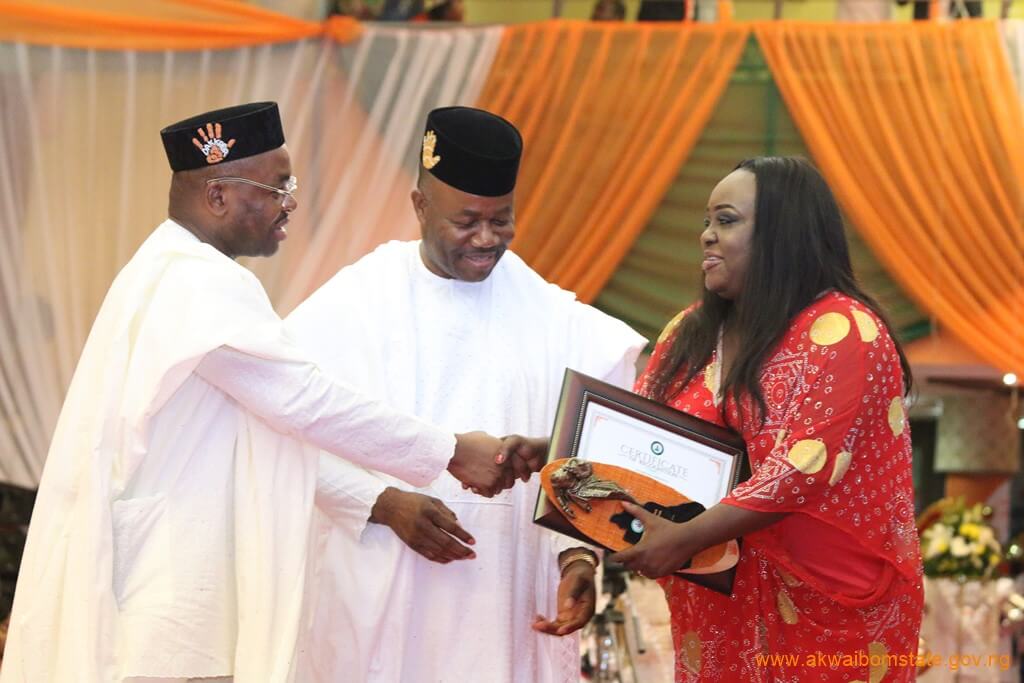 Popular screenwriter and filmmaker, Emem Isong, has been honoured as an icon in entertainment by the Akwa Ibom state government. The award was presented by His Excellency, Governor Udom Emmanuel, during the state’s 30th year anniversary celebration in Uyo on the 23rd of September at the Le Meridien Ibom Hotel and Golf Resort. Others who received the Iconic Achievement In Entertainment award along with her include Dr. Uko Akpan Umana, Prince Patrick Idiong and Chief John Idung.

“After the weekend celebrations and basking in the euphoria of being honoured by my state government, work begins… It feels good when it comes from home. Thank you Akwa Ibom State Government for honoring me,” said Emem Isong in a statement. She also used the opportunity to announce an upcoming series jointly produced by the Royal Arts Academy and ROK Studios. Titled The Heiress, the series was written by Vivian Chiji and stars Queen Nwokoye, Matilda Obaseki, Theresa Edem, Emem Ufot, Emem Morgan, Moses Armstrong, Ekere Okpon, Bernie Obi, Alban Kuffie, and Ini Ikpe.

Emem Isong is a founding member and the CEO at The Royal Arts Academy, an institution tasked with empowering it’s students by giving them the necessary tools required to take part in all aspects of film creation and production. Apart from teaching students what they need to begin a career in the movie industry, the academy also gives students the opportunity to win funding to help them begin their career by actually producing movies the general public can see.

Congratulations to the filmmaker! Let the laurels continue.

Next Post Movie Review; “Lamine” lacks intrigues, & it was meant to be a Thriller