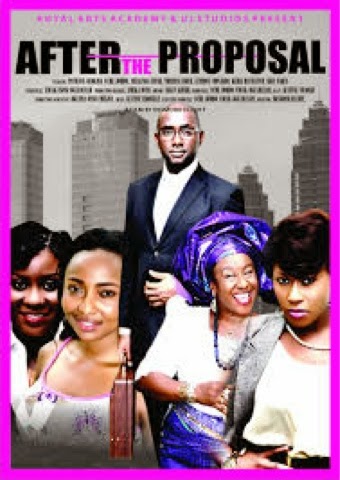 Kenneth and Mary are your everyday couple struggling in the urban jungle called Lagos to eek out a living for themselves. Having dated for 8years, pressure mounts from her fast tongued mother to  settle down and do what is right according to tradition.
After the Proposal, a movie from the stables of UcheJumbo production is a movie deserving of applause. Not necessarily in terms of acting but from its story telling and scripting angles. Extremely simple and focuses on that aspect of society that hasn’t been brooch in a while, the bride price. While it has become a necessary part of tradition that must be carried out, other schools of thought are of the opinion that it’s outrightly ridiculous and day light robbery.
Uche Jumbo who happens to be part writer of this production played her role to the teeth. The concerned girlfriend, with a good understanding of her boyfriends capacities was welcoming. Taking her stand with her man and been outright with her mother is probably an aspect we need to explore in our Nigerian movies and I don’t mean been downright rude and insulting but talking and getting our elders to see reason with the young ones should be adopted more in our movies.
Anthony was the determined and resilient male character, willing to defy all odds for his love. Though most of his expression were tired to his mouth, it was literally funny when he went on the sojourn to purchase the items off the list.
Patience who played the role of mama felt like she should play more characters such as these. It’s understandable why she’s a fan favorite and it was refreshing to see her in another element asides the stereotype one is used too. Keira also delivered a good performance to her role, although more work needs to go into being a bossy boss she was however dogged and equally resilient.
Production was in its top form, as facial expressions seemed to be the drive of the movie. Desmond delivered to the script, arresting us at those crucial scene to catch our attention was deep. I must commend the production editor of this work, even though it didn’t end as exactly 90mins, I must say, I noticed only one unnecessary scene and that can be debatable in some groups. The team responsible for the script, in the persons of Uduak Isong oguamanam, Anthony Kehinde Joseph and Uche jumbo deserve an applause, in keeping the script simple, focusing on dowry payment, as well as sexual harassment or prying on men in the office which isn’t common but absolutely topical and relatable was a plus.
After the proposal was a good production, it shows that Nollywood has started taking the necessary steps in putting together that tight production that speaks to basic happenings in our society that we usually ignore.
After the proposal gets 7.5/10 from Xplore.
No votes yet.
Please wait...
Voting is currently disabled, data maintenance in progress.