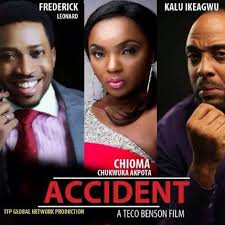 Accident revolves around Chy, a top Nigerian female lawyer played by Chioma Akpotha who instead of carrying out the wishes of her client played by Fredrick Leonard to file for a divorce finds herself entangled and having to defend her honor and marriage.

Now where do I begin, the opening scene kind of got me in stitches as I have mentioned in previous posts, Chioma is as stiff as it gets when it relates to love making scenes and they just had to kick off with this scene as it was the plot of the whole movie. Chioma came out strong as a no-nonsense lawyer who would do what it takes to defend her client. Her costumes depicted her role as a professional and as wife and the make-up was perfect as she looked spent when she was expected and she looked beautiful when this was expected.

Introducing Frederick Leonard, who plays Chike. Now I haven’t seen Fred in another movie that’s why I am introducing him, but if he isn’t new to the scene, please forgive me. For a first timer, he carried his role quiet alright. As an adamant client set on his goal, that was a plus, a desperate convict fighting to survive he was great, as lover boy, erm he needs a little bit of work. Kalu another character who I believe can play certain roles like been a husband in his sleep had a no brainier task. Nothing outstanding about his role, but hey, it’s Kalu Ikeagwu.

My joy from this movie, came from the legal proceedings. While it didn’t have the ‘Suits’ or ‘Boston Legal’ type proceedings, it was a breathe of fresh air, that hasn’t been seen in a Nigerian film production for a long while. Use of the legal language and terms, proper court like setting with court clerk, use of costumes, spot on questions from Wale Macauley  who played the defendants lawyer and Larri Williams who played the case judge. Their portrayal of their roles brought back nostalgic memories and further drove my innate need for veterans in the industry to show the new kids, how it’s done.

As far as directing is concerned, Teco Benson did a good job making the script come alive. This production had good picture quality, scenes and conversations where short, sharp and straight to the point. Not only was Mr. Benson director, he was producer and editor and i must commend him on his editorial skill for this production as they were top notch. Mr. Obasi as script writer delivered to his role and is also heartily commendable.

Although Accident was produced in 2013, the DVD came out in 2014. It was a well put together production and from XploreNollywood it earns 6.5/10