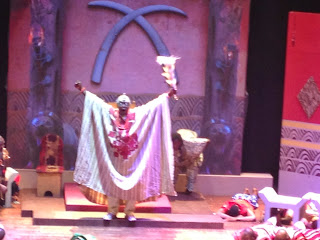 I bet most people figured it out at the end, that the Thespian theatre production of “Mad King of Ijudiya” was actually an adaptation of the life of Herod in the bible. Not sure why Wikipedia refers to him as the great, but Herod was the villain in the Christmas story, a wicked king who saw the baby Jesus as a threat and wanted to murder him.

In the Mad King, Herod is King Ero ba n’ise, the arrogant, defiant and fearless king of Ijudiya, played by Segun Arinze, while His mother Olori and the warrior Iberu are played by Joke Silva and Akin Lewis respectively.
It was refreshing for me to watch our veterans on stage, Segun Arinze, brought his expertise and experience to bear. Even when he whispered he was audible and was revered by his subjects. Akin Lewis was a delight to watch his stage movement and presence couldn’t have been mistaken, in fact I appreciated him better after watching this play. The remarkable Joke Silva, cannot be taken for granted anywhere. I listened raptly to her lines and at all fronts; I felt I was taking an English lesson. Her speech outstanding, her gait amazing and her total performance reeked of skillset that can never be bought.
‘Mad King of Ijudiya’ was a rich blend of folklore, traditional dance and music that naturally transports the audience to a typical African village setting. Majority of the tribes where represented, if not in song, in attires and I was elated at that. One of the innovative things I noticed was the presence of a digital screen on stage. When I saw this, I felt hmmm… ‘Digital meets traditional,’ this was new, different and fresh to me. The screen doubled as a backdrop for the set and was also used for footage of scenes for clearer understanding of what was going on.
Mad King of Ijudiya was an awesome performance with a great cast. As a fan of adaptions, even though most of them foreign (it’s about time Nigerian movies embrace adaptations), it was good to see a popular story in our own light. Kudos to the Thespian family and from Xplore, ‘Mad King of Ijudiya’ gets 8/10
Mad King was written by Ayodele Jaiyesimi and directed by Abiola Segun-Williams of Tinsel fame.
No votes yet.
Please wait...

Next Post Irokotv’s Jason Njoku is Y! /YNaija.com’s Person of the Year 2013.