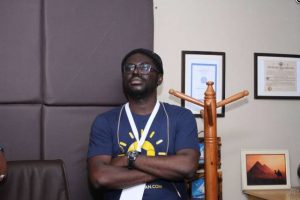 Kemi Adetiba is not returning as a director on the sequel of  “The Wedding Party”. A change of director for sequels happen everywhere. When there is a sequel to a major studio production, there is bound to be a change of director. If you doubt us, check out some of your favorite and successful movies that had sequels. Niyi Akinmolayan takes on Wedding Party 2 and from his film Meet the In-Laws, we trust the work is going to be superb.  Niyi has worked in the TV industry for several years making documentaries before he decided to venture into Nollywood.

We share with you some facts about the director

5. He is dedicated to discovering and enhancing young talents: Last year, Niyi made an announcement on his blog, he had N 100,000 he wanted to give out and so he called for scriptwriters to enter their scripts to be judged by a panel. The winning script by Abosi Ogba was made into a short film featuring Tina Mba and Bimbo Manuel. It caused controversy but we enjoyed the film. Niyi also made an announcement earlier this year; he is looking for a team of young filmmakers interested in making a documentary. He will put in N 200,000 and also train them on how to make a proper documentary. You should keep up with Niyi, he has a lot to inspire creative talents.

4. He directed The Arbitration: One of the best films of 2016 featuring Adesua Etomi, Ireti Doyle and OC Ukeje was directed by Niyi Akinmolayan. The film screened at the Toronto International Film Festival and also made great strides at the box office. It is not Niyi’s first time working with Adesua, they also worked on Falling, Adesua’s debut to Nollywood. TWP 2 will be their third collaboration.

3. He Owns a Film Blog: It is where all the information he has to share with upcoming filmmakers is disseminated, if you are a creative mind, you should follow http://niyiakinmolayan.com/ it drips of wisdom and experience.

2. He is the Founder of Anthill Studios: Anthill studios have produced wonderful films such as Make a Move, The Arbitration. Niyi does not hide his affection for his editor Victoria Akujobi. If you are an exceptional animator or an editor, you might have a future at Anthill studios.

1. He is an Editor, Animator and a Visual Effect expert: He edited “The Department” and continues to be a big fan of female editors. He recently held a workshop for female editors. The workshop was free; the only requirement was that interested participants own a functioning laptop.

We absolutely loved Meet the In-laws, it is Niyi’s most relaxed work and we cannot wait to see the direction he takes with TWP 2.