Thursday, 8 Dec 2022
By Turidee - June 3, 2015
92 0
I know this is Xplorenollywood, but I couldn’t pass off talking about the movie “San Andreas” and the total awesomeness I felt after watching it. 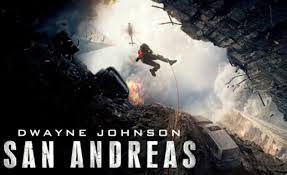 Hollywood loves a good disaster movie, from tornados, volcanoes, twisters you name it they have created it all. They usually don’t pull any punches when it comes to visual effects, as you get to picture one of the most prominent states in America crumbling down and just while you are imagining if it could get any worse a hero swoops in to save the day.
I sort of turned off watching disaster movies for a time, but with the release of Dwayne ‘The Rock’ Johnson’s “San Andreas” I went in to watch the movie and I was totally blown away. So I decided to run a top five series of things to look out for in ‘San Andreas’ (there are obviously spoilers, but I have no apologies guys!).
Here Goes:
§  1. They have an all-star cast

Like most good disaster films, San Andreas features an all-star cast. The lead role is played by Dwayne “The Rock” Johnson as mentioned, he’s joined by Carla Gugino ( Spy Kids trilogy, Watchmen, Sucker Punch) as his estranged wife, Alexandra Daddario (Percy Jackson 1 & 2), as their daughter who is heading off to college, Ioan Gruffudd (Fantastic Four ) as Gugino’s new and impossibly rich boyfriend, Paul Giamatti (The Amazing Spider-Man),  as the scientist who is in the movie to explain things to the audience, and Archie Panjabi (The Good Wife Series) as a reporter. Putting all of them together as well as their chemistry made the movie more exciting to watch.
§  2. There is a lot of foreshadowing of what’s to come
This basically is what Paul Giamatti’s character is in the movie for. He puts the fear of God in his students and all who care to listen that what is coming is a 9.1 earthquake, one that will not only affect San Francisco but the other states along the coast (deep) 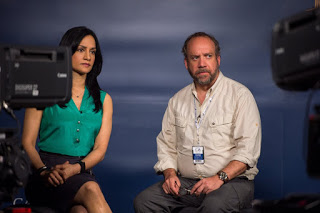 §  3. There are multiple close calls 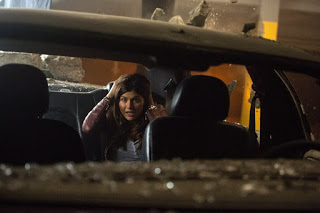 Close calls are the order of San Andreas and thanks to great special effects; they had me in total awe. From the girl getting rescued from the car, the destruction at the Hoover Dam (tossing the girl was expected and close), the restaurant blowing up and getting away in the helicopter (at a point, I thought the ex-wasn’t going to make it), the tsunami and the golden gate ruin (I believe Fast & Furious series has taught The Rock a thing or two in this regard), one can go on, but these were just a few of the doomsday scenes in the blockbuster that got me at the edge of my seat.
§  4. Characters die horrible deaths
One of the most memorable deaths was that of Will Yun Lee at the destruction scene of the Hoover Dam. It felt so so real, in fact the sighs and insults in the cinema hall got my reeling with laughter, however the other deaths in this movie can be classified as pretty horrible, omo, did you see the death of that guard at Ian Gruffudd’s office? When he also eventually died, he had a crane fall on him, oh com’on man!
§  5. There are explosions galore

What will a movie of this kind be without explosives, a cinema with great Dolby sound will be appreciated when you watch this movie. The explosions na die, especially the kitchen scene again, the crumbling of buildings, the crashing of roofs, buildings and cranes on people the destruction at the AT & T stadium, let me not forget that tsunami, Hian! That was epic! The Rock will not kill me biko! 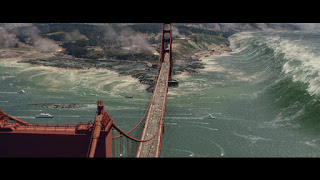 On a final note and as usual with Hollywood movies and driving the American patriotic spirit we see a devastated San Francisco and from nowhere an American flag just pops up on what happens to be the remains of the golden bridge, and ‘The Rock’ is asked, “Now what?” In full-on Rock mode, he responds “And now we rebuild.” Really??? Is that what they will be thinking about? Lol
So that’s the top 5 things that got me excited in San Andreas. Turns out the movie has topped the US box office, taking $53.2m (£35m) over the weekend, beating movies like Pitch Perfect 2 and Mad Max.
Have you seen “San Andreas” share you wow moments in the comment section.
No votes yet.
Please wait...
Voting is currently disabled, data maintenance in progress.