A good film is one that will always be remembered. Some of them are wild and give us so much joy; we remember them even when we shouldn’t. Two Brides and A Baby has its faults but we also have five reasons why you should watch this great film. 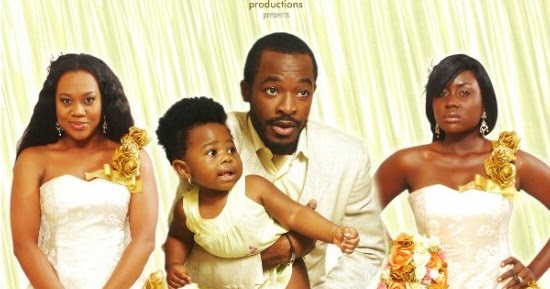 Kole( O.C Ukeje) and Keche (Keira Haywatch) are an engaged couple. They have their ups and downs like every couple in a relationship. On their wedding eve his ex appears with a baby. It is his child!

With the appearance of his baby mama, the drama starts and will their relationship survive or crash, is left for us to find out. It makes for a very interesting twist and what we get from Kole, Keche and Ama is an interesting drama. It lets the viewer pick sides between the three main characters that provide us with a wild drama. At the end of the film I was on the side of each of the main characters but I was able to relate to Keche.

Visually Two Brides and a Baby is stunning. We get fantastic locations and really wonderful shots of the actors. The sound is also great. A lot of work was invested from the part of the director, Teco Benson. Teco is a veteran that keeps doing incredible work, what we end up with is a great production that makes us appreciate that someone with years of experience in the industry helmed the affair of Two Brides and A Baby.

O.C Ukeje, Keira Haywatch, and Stella Damascus are the spice of the film. The film is centered on the three characters. Each actor makes a case for their character but the best performance comes from Stella Damasus, she proves that years of experience really matters and with time and dedication, it can only get better.

It is on our throwback review because you can also watch again and compare the growth of the actors. How they have improved on their craft. How they have evolved in the movie making business.

Keira Haywatch was just starting out, after featuring in the highly rated TV show Disclosure. There was a lot of buzz on how she resembles Mercy Johnson and people were looking out, if she will be as good as Mercy. At the time the film was released, Mercy Johnson was on a career high. Keira has gone on to feature in many acclaimed works such as Lekki Wives and Dowry with prominent roles in each. Fresh off his AMBO win, O.C Ukeje was featured in the AMBO project White Waters but he was not yet the movie star, featuring in Two Brides and A Baby catapulted him to super stardom and there were more film roles for O.C after that.

What we learned is that commitment is commitment, even though this is a romantic comedy. The heart can make decisions and so can the brain. Strength comes in the ability to strike a balance between what the heart wants and what the brain needs.

Downside of the film

Kalu Ikeagwu fails woefully imitating a Yoruba accent and it made me think, they could have just cast an actor that has the accent. It could have made for a fantastic comedy all through.

Xplore rates Two Brides and A Baby with a 7/10!

Have you seen ‘Two Brides & A Baby’? Tell us what you think in the comments section.

Next Post Gone Too Far Deserves All the Rave it Got in 2013, Read our Review on our #TBT Movie!