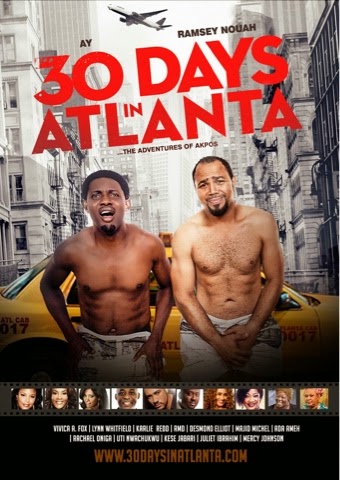 The movie started on a rather frenetic pace with the appearance of Akpos (AY) and Richard (Ramsey Nouah) at the entrance of a supposedly all couples event. I had thought they were actually a couple (gay couple) I mean, but, was kind of relieved that Akpos was actually Richard’s visiting cousin from Warri. What followed was not particularly novel, as the bouncers doing what is expected of them and expectedly the madam coming to save the day is a typical Nigeria scenario, even in real life, which says so much about our attitude to invitation for events.

For the event proper, (guess, the viewers were kind of at a loss on what the movie was all about) as it looked more like the movie premiere rather than what it was meant to be. Majid Michel as a character and his scene, body language and the ‘line…..I am not a man with many words, bla bla bla and yet he went on and on with that effusive animated what nots. Anyway, I think he does not need to try too hard as his place in history is made as one of the overused and overrated and maybe overpaid actors of our time.

With the short role acts, Freeze, Juliet Ibrahim and Solid Star; I thought Freeze tried a tad too hard to sound convincing and natural. Juliet felt just too flat and subdued. Guess her role was an afterthought and thus the paycheck a semblance of a stipend. But she can do better. I don’t get the appearance of Solid Star in the flick. No performance, not even a speech, just a sheepish smile and a very weak handshake by Freeze. Well….as the name goes; it’s just a special appearance GBAM.

Let me quickly dive deep into the entire plot, which is a typical Nigerian setting, a cousin visiting a brother in Lagos and all the adventures and misadventures of the city experienced.  Definitely not a contender for innovation or ingenuity, but I will say a comic relief from the many bland productions of 2014.  A usual story retold in an unusually funny manner. The fact that it was able to hold the viewers glued to their seats for almost two hours and bursts of laughers and shrieks in between for me is a plus and definitely a positive. Agreed, this is no ‘HANGOVER and definitely not a ‘COMING TO AMERICA’, but it’s a comedy none the less.

There was a very commanding performance from AY, funny, garrulous and assured. Sometimes a bit too self-assured and somewhat overbearing, but in all, an above average interpretation of his role. As it relates to Richard, not so sure what informed the choice of Ramsey as Richard, as it didn’t feel like he gave the role much flair. Not very consistent and convincing in delivery and performance. He moved from being uptight, disinterested and sometimes pedestrian in this production.

I am beginning to wonder if Desmond is reaching his tenterhooks or maybe he’s just not into it. Another unnecessary cameo role in the character of Okiemute as with ‘WHEN LOVE HAPPENS’. Bland dialogue an equally flat delivery, a futile attempt at playing Andrew, one question though, must he be in all movies?

Enter Kesse Jabari, where has he been all this while, last I remembered he was a fashion designer, where did this acting come from? Granted he did a couple of cameos before he relocated, but to return to the scene with this (smh). His acting didn’t cut it for me. Especially, the presentation scene, what was that. He looked lost for words and far less convincing for a supposedly cerebral academia. I guess he would have done better giving a talk on Evolution on ‘Tailoring to Fashion Designing.

The American Trinity: Vivica, Lynn and Kellie (Uncle Wilson’s wife, Omotogbe and Kimberly) expectedly, they all did well. Vivica in her feisty, self-assured and commanding presence. Always love her acting. Not much to do though, a role is always going to be a piece of cake for this veteran. Omotogbe was brilliant as a defence counsel, her husky voice was very sexy and commanding. Kimberly was just okay and very appropriate for her role.

In all, I will rate the movie as thus:

My biased opinion is that 30 DAYS IN ATLANTA is a fine movie, not a ‘MUST see, but definitely worth two hours of comedic fun.