On a cool Tuesday evening, a film trailer was playing on Africa Magic and I was paying attention. What I saw on screen was three movie veterans letting loose. 3 Wise Men features Zack Orji, Richard Mofe-Damijo, and Victor Olaotan. This film can either be totally great or it can totally let us down.

Three Wise Men is directed by Patience Oghre Imobhio (The Novelist) and produced by Opa Williams.

Zack Orji is Timi. RMD is Irikefe and Victor Olaotan is Tobore.

Here is why I am excited about seeing Three Wise Men and I hope it is worth it. 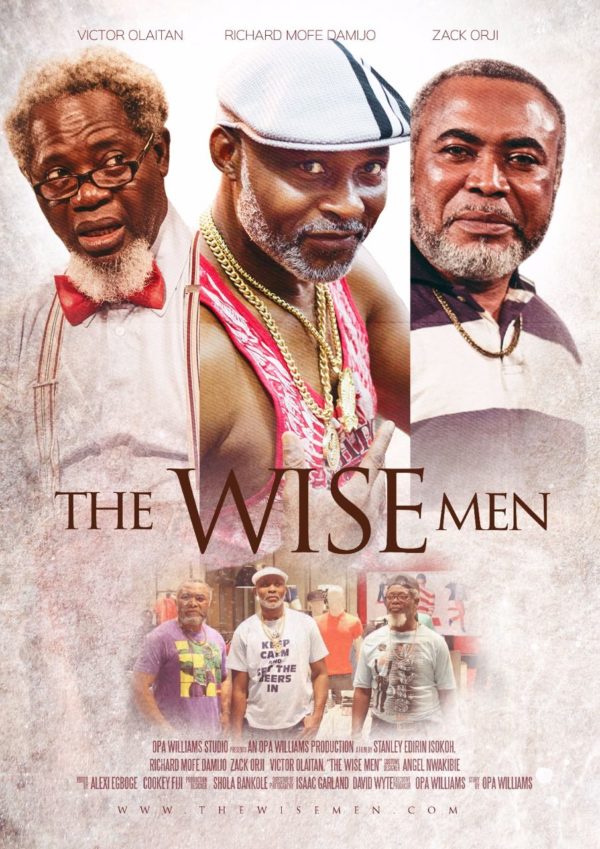 The trailer was hilarious not for the dialogue but the storyline the film promises to give us a rare perspective of what retirement could mean in the digital age. The story is about three retired government workers who settle in a suburb to enjoy their retirement benefits, in a digital age, it is hilarious to see how they spend their retirement money. They take selfies, buy new cars and take the pictures and post it online with hilarious captions, we see all these in the trailer.

Interestingly, Irikefe is a three-time divorcee and from what we see, he seems to be the loudest of the three. I hope it makes me laugh. My expectations are really high.

2. It Features Zack Orji, Richard Mofe-Damijo, and Victor Olaotan Like we Have never seen them before:

They have always played authoritative bosses. That is how they have made their mark in the industry. Zack Orji has taken many challenging roles. He has been many things in his films. RMD has evolved from the lover boy we grew up watching to the respected actor he is today. Victor Olaotan is mostly known for his role in Tinsel and has also featured in many more productions but we have never seen any of them in anything like this. Comedy is a difficult job. I will like to see what these veterans do in this film. We can either respect them more after we watch this production or it can also make us ask, what were they thinking? Whatever it is, I think it is a production that gave them an opportunity to relax and do something outside their comfort zone.

3. It is Directed By Patience Oghre:

She directed the thriller The Novelist. I watched the Novelist and I was impressed till I got to the end of the film. It was supposed to be amazing all through but I still can’t understand why she decided on such an ending for the film. It let me down. I’ve checked for her other works but it is finally coming in the form of Three Wise Men. It seems like a last minute announcement, it was not on Xplore’s countdown for the films to look out for, for the rest of the year because we didn’t hear of it. Last month the trailer was not even out and it is already slated for a grand premiere. I would like to see what Patience does with this film, I hope it is fantastic to launch her as a respected female movie director, it is high time. The Novelist was a good attempt and maybe this can be what catapults her to the top of our list.

Watch the trailer of 3 Wise Men and tell us, in the comment section, are you excited or what?

Previous Post ‘Walking Away’ Puts Love and Marriage in Perspective

Next Post JP Wordsmith Rebirths Romance in ‘Moth to a Flame’