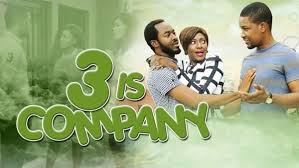 Eunice and Chuma are a young married couple with a seemingly witty, struggling friend Fred. As a project manager, Eunice faces her demons at work with an overbearing colleague who she can’t stand until herself and husband’s best friend and third wheel falls head over heels for her.

Three is Company is the first production of Yvonne Jegede, an aspiring actress, why do I say aspiring, cause I haven’t seen any film from her neither have I paid any notice to headlines or pictures that mention her so she is our basic green horn. As producer and part writer, she plays the lead and wife of Chuma played by OC Ukeje. As a wife she gets a pass, as a worker having to deal with an overbearing colleague, she could have infused decorum in the character in handling her colleagues antics. So basically, that aspect was a fail for me.

OC seemed to be the only logical character in the production who held his own. He was calm and collected. The movie didn’t task him or add to his credits really and as a husband, I guess the director just said, you know what, do what you do everyday at home!

As it relates to the 3rd wheel in this production Wole Ojo from he’s Maami days, he has come a long way, to want to take up small projects like this that do nothing for his career. He had nothing less than1000lines to his credit that I wondered why use him in the first place surely a relatively new comer could have done this (chill, isn’t it the same way he was in “Maami”?)  His character as 3rd wheel, was handled okay, as the guy searching and finding love, he was an epic fail. Being witty and having spunk were attributes that would have paid him, as his conversation revolved around dating, women, food and work, but even those lines were not worth remembering. Food for thought though, do our actors add or infuse stuff in their characters? For his role, I don’t think so!

For  Komsi played by Peggy sigh! I am wary about month and finger emphasis when one should be acting really! She seemed stiff and if the planned was for her to be an uptight, nasty worker, she lost me at the exchange of names! For pete’s sake, people are nasty without resorting to name calling especially in an office plus what was that fight scene, been a while I saw such market behavior in film.

Production quality wasn’t too shabby, with clean and clear picture quality but I hit a snag with sound and the camera dude reflecting in a scene. For the story or would I say screen play, this production felt like a slap on my face. We all work, we have had our share of overbearing colleagues, if you can’t work with them, there are clear cut process for dealing with that than resorting to name calling and complete removal of any professional decency what’s so ever. While I also understand that it is a film meant to be over under a certain time limit, it was a far cry from reality and this just left me angry and displease. For Ernest Obi, a nollywood veteran, (hoping this is the same one) he might not have written the script but he could have guided Yvonne who we all know is a novice in the industry.

Playing the duo role of actress, producer and story creator, is no easy feat, I say it all the time. But the Yvonne Jegede production “3 is Company” however was lacking the dexterity of a good script, immature lines a functional costume department and doze of reality.